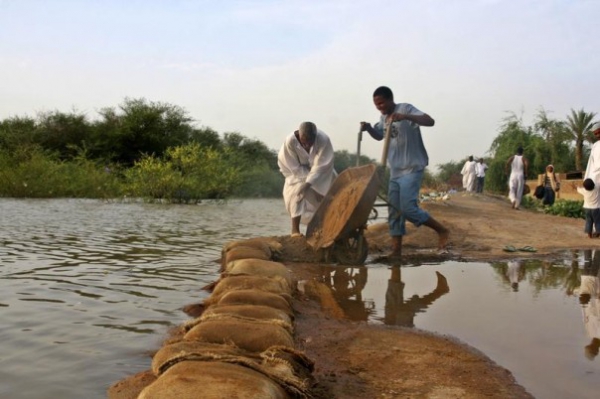 African negotiators and climate activists have called on wealthy nations at U.N. climate talks in Warsaw to say how they willl boost funding for African and other developing states to adapt to climate change and pursue green growth.

“African governments need access to climate funds. These funds are needed for climate adaptation, mitigation and technology transfer, capacity building and forest conservation,” JosephÂÂ  Armathe Amougou, head of the Cameroon delegation at the climate conference, told Thomson Reuters Foundation. “Most of the money promised is still to be made available by donors and we think Warsaw is the place for a decision to be taken.’’

Other African representatives said climate impacts are multiplying in many developing nations like the typhoon-hit Philippines, underlining the need to protect vulnerable states from rising risks of extreme weather.

“We have just listened and watched with horror what has happened in the Philippines, and we know that similar impacts of climate change are ravaging many other countries in Africa – with attendant loss of lives, property and means of livelihood eroded on a daily basis,” said Augustine Njamnshi of the Cameroon branch of the Bioresources Development and Conservation Programme, an Africa-focused NGO.

“Heavy floods in the Far North region of Cameroon in 2012, for example, claimed over 250 lives, leaving families and the government helpless,” he added.

The World Bank estimates that $30-100 billion will be needed to finance climate adaptation annually by 2030, and an additional $140-175 billion will be required for mitigation efforts to reduce greenhouse gas emissions.

Developed nations have promised to mobilise $100 billion a year for these two purposes by 2020, up from around $10 billion in annual “fast start” climate finance from 2010 to 2012.

“The sums required are significantly larger than the pledged $100 billion by the year 2020,” said a statement setting out the position of African civil society for the U.N. negotiations. “Developed countries have agreed to maintain average finance levels – roughly $10 billion a year – which they provided during 2010-2012, until 2015. But they have made no pledges for 2015-2020, leaving a five-year gap.”

A separate report published by aid group Oxfam on Monday said poor countries have little idea about what money is available to help them cope with climate change, because of murky accounting methods and a lack of transparency by rich countries.

Oxfam estimates that the climate finance contributions claimed by developed countries in 2013 total $16.3 billion so far, although actual net budget allocations may be closer to $7.6 billion as some donor countries have counted loans that will be repaid to them.

The report calls on rich countries to make clear in Warsaw what money is available now and the future. Only the United States, the European Union, Japan and New Zealand have adhered to a commitment made at last year’s Doha talks to say how they will increase funding to reach their share of the $100 billion a year promised by 2020.

“Uncertainty from one year to the next makes it impossible for vulnerable countries to take the action they need to protect their citizens,” said Oxfam’s climate change spokesperson Kelly Dent. “This murkiness will only heighten distrust around the negotiating table.”

Climate finance is the key to unlocking barriers to climate action across the African continent, African activists said.

‘’Climate-vulnerable, least developed countries need increased finance to adapt to the impacts of climate change. How will these resource-poor countries adapt without the necessary funds in place? ‘’ asked Mithika Mwenda, secretary general of the Pan African Climate Justice Alliance (PACJA).

“We demand that developed countries fulfill and implement their commitments under the U.N. climate convention, in order to fairly share the necessary ‘emissions budget’, and avoid catastrophic climate change impacts,” Mwenda said.

Habtemariam Abate of the Ethiopian Civil Society Network on Climate Change agreed with the concept of an “emissions budget”, raised in a recent report from the Intergovernmental Panel on Climate Change (IPCC) which estimated a limit to the cumulative amount of carbon dioxide the world can emit if it wants to keep global temperature rise to 2 degrees Celsius.

“Africans expect governments to stand firm on setting an emissions budget, as recommended by the IPCCC. They must then share this budget fairly, based on historical responsibility and capacities,” Abate said.

In line with this approach, African civil society groups also set out proposals on how to deliver energy access to those who lack it, while avoiding the use of dirty fossil fuels. They also recommended the adoption of a globally funded feed-in tariff, which could encourage the development of renewable energy.

“Warsaw should be the place and moment for the world to choose clean over dirty energy, and Africa will be championing this choice. The best (climate) agreement on Earth won’t make a difference without implementation in the real world. That’s why one of the clear outcomes in Warsaw must be the drastic scaling up of climate finance and technology transfer,” PACJA said in a paper presented to journalists.

Men work to build a flood barrier to protect their houses from the rising waters of the White Nile River in South Khartoum, Sudan, Aug. 26, 2013. REUTERS/Stringer