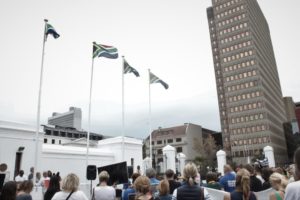 After months of silence from government on the progress of the Climate Change Bill, Environmental Affairs Minister Barbara Creecy informed Parliament during her Budget Vote speech on 11 July 2019 that the second draft of this critical piece of legislation is currently under review at the National Economic Development and Labour Council (Nedlac).

The first draft of the Bill was released for public comments in July last year. At the time, the African Climate Reality Project and numerous civil society organisations committed to addressing climate change, submitted inputs on the draft legislation.

The African Climate Reality Project welcomes the Minister’s endeavour to keep Parliament and the South African public abreast of the progress on the Bill, and for demonstrating the government’s commitment to see this legislation through.

South Africa urgently needs to legislate on climate change in order to domesticate its international obligations under the Paris Agreement on Climate Change, ratified in 2016. This is a critical and urgent step to provide the country with the legal basis for ambitious and immediate action to address the climate crisis.

In November 2018, the then Department of Environmental Affairs (DEA) announced that the Bill would be presented to Cabinet for approval and introduction to Parliament by June 2019. This timeline has since been extended. According to the Annual Performance Plan 2019/20 of the Department of Environmental Affairs, Forestry and Fisheries (DEFF), the Climate Change Bill is now scheduled to go through further consultation until the end of the year, so that it can be submitted to Cabinet and tabled in Parliament in the first quarter of 2020. The parliamentary review process can be expected to take several months, especially as the Bill should be reviewed by both Parliament at national level, and the nine Provincial Legislatures.

In the light of the urgency to take rapid and ambitious action to mitigate climate change, we think this legislation needs to be a priority of the Department, and progressed faster than the proposed timeline. South Africa is expected to present a plan to enhance its Nationally Determined Contribution by 2020 and cut greenhouse gas emissions by 45% over the next 10 years, at the United Nations Summit in September 2019. We feel that the legislation should progress accordingly, based on the principle that legislation should drive policy, and not the other way around.

The Climate Change legislation must be a reflection of the country’s long-term ambition in terms of responding to the climate crisis. It should prescribe clear and ambitious goals to ensure South Africa’s “fair contribution” to limiting the increase of global temperatures to 1.5°C above pre-industrial levels.

This is why we call on the Minister to make public the second draft of the Bill currently being discussed at Nedlac, so that interested parties may observe how the comments on the first draft Bill in 2018 have been considered and have influenced the second iteration of the draft Climate Change Bill.

The Department should be commended for subscribing to a participatory process on the Bill, and for its commitment to consider all comments for the revision of the first draft. For this reason, the public should be given the opportunity to assess the robustness and ambition of the various iterations of the draft Bill, as a way of getting feedback on the comments made, and being informed of the direction the Bill is taking.

Under Action 24 – Active Citizens for Responsive Legislatures, a European Union co-funded initiative implemented jointly with the South African Institute of International Affairs (SAIIA) and the South Durban Community Environmental Alliance (SDCEA), the African Climate Reality Project is committed to fostering meaningful public participation in this legislative process. This requires open and ongoing information, so that citizens can actively and constructively engage on the matter.