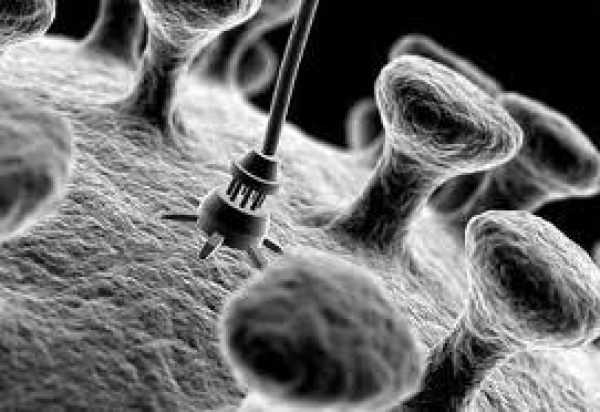 Finding new ways to tackle the growing challenge of accessing clean drinking water has become a priority for most countries around the world, including South Africa. With recent statistics indicating that more people are dying annually from unsafe water than from all forms of violence combined, including war, there has never been a greater global need.

In South Africa, an estimated 5.7 million people lack access to basic water services, and about 17 to 18 million people lack basic sanitation services. Impacting mainly the marginalised poor, these figures are likely to increase due to industrial expansion, rising population and climate change, which is set to drastically affect sub-Saharan Africa.

One of the approaches being explored in many countries, including South Africa, to tackle the challenge of providing clean water, is nanotechnology. Nanotechnology is the manipulation of materials at a very tiny scale – essentially at the atomic and molecular levels. At the nano scale, the normal rules of physics and chemistry often do not apply, and as a result many materials start to display unique, and sometimes surprising properties.

The properties offered by nanomaterials make them well suited for treating water, and provide an opportunity to refine and optimise current techniques. This technology can also provide new and novel methods for treating domestic, industrial and mining wastewater.

Essentially, nanotechnology can offer a tailor-made solution to remove a particular contaminant, or a solution that ‘multi-tasks, using different nano-based techniques. This is ideal for water purification, because water contains different forms of contaminants at different locations, such as heavy metals (e.g. mercury, arsenic), biological toxins including waterborne disease-causing pathogens (e.g. cholera, typhoid), as well as organic and inorganic solutes.

Although nano-scale materials have always existed, the concept of nanotechnology was first documented in 1959 at a talk given by physicist Richard Feynman at an American Physical Society meeting. Almost twenty years later the term ‘nanotechnology’ was defined in a scientific paper by Norio Taniguchi at Tokyo Science University. 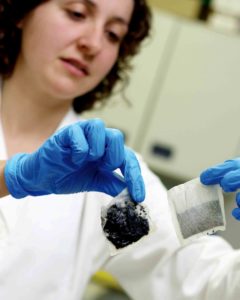 It remained largely theoretical until the early 1980s when the scanning tunnelling microscope (STM) was developed and a few years later the atomic force microscope (AFM). This equipment made it possible for nanoscale materials to be seen, characterised, manipulated and even manufactured.

In South Africa nanotechnology has been embedded in national strategy and policy since the publication of the White Paper on Science and Technology in 1996. The National Nanotechnology Strategy (NNS) was launched in 2006.

Water is one of six focus areas highlighted in the NNS, where nanotechnology can offer the most significant benefits for South Africa. This is reflected in the high volume and quality of research at various institutions around the country.

To date, through the Department of Science and Technology (DST), the government has invested over R170 million in different aspects of nanotechnology research and development (R&D).

Two nanotechnology innovation centres have been commissioned and have formed collaborative partnerships with industry, universities and bodies such as the Water Research Commission (WRC) to conduct cutting-edge research.  Much of this has focused on water purification, and as a result, a range of water treatment devices that incorporate nanotechnology are already commercially available around the country. 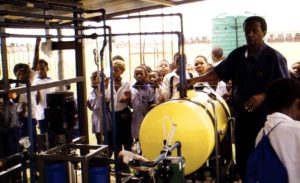 A locally produced membrane and filter system for potable and industrial water is already commercially available in South Africa. The aim of the project between the University of Stellenbosch and the Water Research Commission (WRC) was to produce suitable cost-effective systems to replace expensive imported equivalents.

With a pore size of 35 nanometres in diameter, the capillary ultrafiltration (CUF) technology enables the removal of bacteria and viruses, colour, metal oxides, namely iron, manganese and aluminium. It is also suitable for pre-treatment of seawater and the treatment of industrial water and wastewater.

Ikusasa Water was granted the licence by the patent holders (WRC) to produce the CUF membranes and membrane systems in a factory in Somerset West in the Western Cape in late 2009.

A partnership between the University of the North West and the Council for Scientific and Industrial Research (CSIR) has developed a treatment plant in the rural village of Madibogo in North West Province. The plant incorporates ultrafiltration membranes to clean brackish groundwater as the majority of the inhabitants depend on groundwater or borehole water for their water needs.

Several types of membranes were tested in this pilot study, including reverse osmosis membranes and ultrafiltration membranes, to see which would most successfully remove the polluting solutes while retaining the essential nutrients.

This pilot study has demonstrated the importance of available supporting infrastructure (e.g. electricity) and the need to involve the local community to ensure the up-take and sustainability of the technology.

Dubbed the ‘tea bag’ filter, this is a water filter small enough to fit into the neck of a bottle which may provide a very cheap solution to purify water in remote areas or where there is no regular water supply of potable standard. It could also potentially be used worldwide by relief organisations where clean water supplies are threatened by water-borne diseases such as cholera as a result of natural disasters such as earthquakes and floods.

The ‘tea bag’ filter sachets are made from the same material as Rooibos tea bags, but contain activated carbon instead of tea. The inside surface of the tea bag material is coated with a thin film of biocides encapsulated within tiny nanofibres.

This makes it unique amongst available water filters, since the filter traps the bacteria, which are then killed by the biocide coating. The tea bag is placed in the neck of a bottle and when the water passes through the filter, all disease-causing microbes are killed, making the water safe for drinking.

This low-cost technology, developed by a team at the University of Stellenbosch in the Western Cape headed by Prof. Eugene Cloete, could well provide a novel, effective point-of-use technology with a huge potential impact globally.

Once used, the tea bag filter is replaced, preventing the problems associated with clogged filters leading to ineffective use. Since the nanofibre is also a solid structure rather than a nanoparticle, the filter biodegrades and so there is no risk of unintended impacts on human health or the environment.

The tea bag filter will be tested soon by the South African Bureau of Standards, after which the project team hopes to roll it out to various communities. 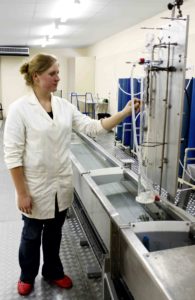 Uses of nanotechnology in water treatment

The applications of nanotechnology being investigated and applied in the water sector include:

Benefits include specificity and smart filters

Nanotechnology offers a number of benefits to the water sector, for instance, by enabling more effective removal of contaminants at lower concentrations due to increased specificity and smart filters tailored for specific uses. Novel reactions at the nano scale due to increased numbers of surface atoms may also enable the removal of contaminants that were previously very difficult to treat.

The number of treatment steps, the quantity of materials, as well as the cost and energy required to purify water could be radically reduced using nanotechnology, making it easier to implement in remote rural communities. It will also impact on the way water is purified around the country once the initial investment has been made by the water industry in developing the new infrastructure required. Before this time, improvements to existing materials such as membranes can be made through nanotechnology.

Nanotechnology, which is right at the cutting edge of discovery, offers a variety of new career opportunities for today’s young scientists. Due to the cross-cutting nature of nanotechnology, there is a multitude of possible careers to pursue and an array of new opportunities for up-and-coming youngsters. Specialised post-graduate courses are likely to be developed in the next five to ten years to meet the increasing need for expertise in the nanotechnology field.

In addition to being used to improve water technology, nanotechnology is being applied by other economic sectors such as health, consumer products, industrial applications, etc., and to date more than 1 100 nanotechnology-based products are already available to consumers worldwide.

There are concerns that the same properties (size, shape, reactivity, etc.) that make nano particles so useful could also make them harmful to the environment and toxic to humans, for example, if they enter and build up in drinking water supplies and the food chain.

Based on the scientific findings published to date in this field, these nanoparticles are likely to interact and destroy beneficial bacteria which play an important role in wastewater treatment plants.

Risk assessment research is crucial for establishing the potential impacts of nanoparticles upon human health and the environment: the technology’s benefits must be balanced against any unintended consequences. This is a massive challenge, since it is very difficult to monitor the possible impact of the huge volume of diverse nanoparticles being produced and used in different products and applications.

Research to investigate safety and ethics

Although there are currently no nanotechnology-specific regulations in South Africa due to the relative infancy of this emerging technology, the government, through the DST, is funding a research platform to investigate the environmental, safety and health aspects of nanotechnology. This will include an inventory of nanoparticles in production or use in South Africa, as well as focused research and development of the required infrastructure and human capital.

An ethics committee is also being established by government, made up of diverse stakeholder representatives to ensure that the technology adheres to ethical principles. To date around the world (in Canada, the US, Japan and the European Union), relatively loose regulations have been developed mainly based on inconclusive evidence and scientific data that demonstrate the impact on humans and the environment of products already in use. It is likely that these regulations will be modified and tightened accordingly as new data become available.

It is important that nanotechnology be developed in a safe, responsible, acceptable and sustainable manner. As risk assessment becomes an integral part of nanotechnology research in South Africa, the risks may be avoided based on the lessons learned from other technologies in the past, such as asbestos, DDT, etc., which were later withdrawn from use.

Although substantial initial investment would be required to incorporate or switch to nanotechnology-based water treatment methods, once adopted, maintenance costs would be considerably lower over the long term and a higher-quality water product would be provided, particularly to rural communities.

It is vital that the water sector becomes familiar with this technology as it is set to change how water is cleaned, and clearly stands to offer significant advantages for a country such as South Africa.