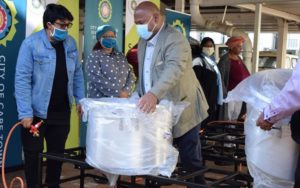 In the front are Zainab White, Shanaaz Salie and Mayor Dan Plato while looking on is Maria Gertse and Stephanie Jansen, who are all part of Strand Outreach Kitchens.

‘We are nearing an important milestone in our drive to feed communities affected by the national lockdown. Today’s handover in Strand means we are reaching even more residents in need. I am pleased to see the positive feedback we have received on this important project. We have moved to Alert Level 3, but the need for assistance continues, with many unable to put food on the table. This project to boost existing soup kitchens in Cape Town is part of our mission to be a caring city; to assist as far as possible in making sure our residents do not go hungry,’ said Executive Mayor Dan Plato.

Since the start of the lockdown three months ago, Mayor Plato has supported 133 soup kitchens across the metro with equipment and/or ingredients. By capacitating these organisations, we hope to soften the impact of COVID-19 on our communities. 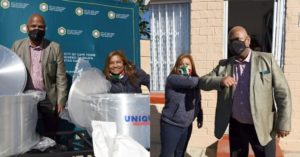 The soup kitchens receive a combination of a three-plate burner stove, gas canister, two large pots and dry ingredients. This ensures that more people are fed on a daily basis.

‘It is my wish for everyone in my community to go to sleep with a full stomach. We feed them in the morning and afternoon. This donation will help a lot to feed more people.’

Last week, the Western Cape High Court ruled that the work of soup kitchens can continue unhindered as food relief is a much-needed support to communities affected by the national lockdown. This means we can continue wholeheartedly with our efforts to feed the residents of Cape Town. 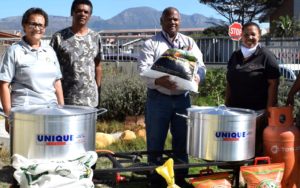 NGOs based in Grassy Park and Lavender Hill received a three-plate gas burner, two large cooking pots and a range of dry ingredients from Mayor Dan Plato in April.

Mayor Plato also participated in a feeding session in Eastridge Mitchells Plain with an organisation, which has previously received a donation of equipment. This was so he could see first-hand the impact of the increased capacity at the neighbourhood feeding scheme.

Food aid is the direct responsibility of national government, through the South African Social Security Agency, but the City of Cape Town is doing what it can to fill the gaps.

More handovers are planned over the coming weeks to further support vulnerable residents, with a total of 200 handovers planned.

Mayor Plato has appealed to residents to continue to adhere to the regulations of wearing a face mask, washing hands regularly and practicing social distancing as a way to ultimately beat COVID-19, and help us rebuild Cape Town’s economy.

We can make it through this as #OneCityTogether.