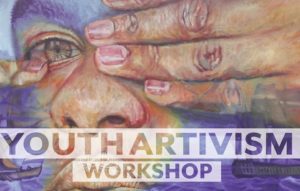 With less than a month to prepare for what may be the biggest global climate strike action to date, the first-ever Youth Artivism Workshop was held at Community House in Salt River on Saturday.

Hosted by 350 Africa, Project 90 by 2030 and HoneyBush Communications, the art workshop sought to raise awareness about climate change among the youth of Cape Town and the country at large. The event demonstrated the use of art by young people from the Western Cape, as a way to reflect on how to address these issues.

According to Saba Zahara, Creative Director at HoneyBush Communications and the event organiser, “The workshop is particularly targeted at youngsters from historically disadvantaged communities, who are often disengaged from issues such as climate change. Sadly, as a result of the daily challenges they face – such as poverty, drugs and gangsterism – our youngsters are not being included as part of the solution. In many ways, our communities are on the outskirts of the ‘Green Movement’ in this country. Through this event, however, we hope to bridge this gap because climate change is affecting all of us and poorer communities are the ones who will suffer most.” 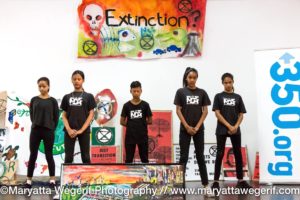 “Through this milestone event, we hope to stimulate not only creativity in our youth, but we also hope to give them a voice and develop their desire to become active and responsible citizens who are adequately informed and equipped to address this current state of emergency. Furthermore, we want to show them the power of art as a tool for activism,” says Zahara.

This year, youth around the world have been at the centre of the climate conversation by raising awareness through platforms like the Climate Strikes and Fridays for Future protests.

During the State of the Nation Address, President Cyril Ramaphosa remarked on the presence of youth-led climate protests at the Union Buildings, saying that unless we take extraordinary measures, we will not realise Vision 2030:

Lorna Fuller of environmental justice organisation Project 90 by 2030 said, “The overall intention is to engage children, teenagers and young adults to get their perspective on current environmental concerns and then to create powerful artworks with strategic messages – in an iconic and historical space, Community House – via a mixture of creative art, guerrilla filmmaking and other diverse artistic processes.”

Tshepo Peele from 350 Africa says, “It is important for 350 Africa to combine art with environmental activism as it is our goal to reach a wider audience, across all age groups, especially in preparation for the biggest Global Climate Strike happening from 20 – 27 September.” 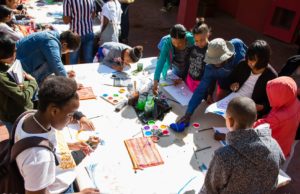 The Artivism workshop explored – through selected artistic mediums – issues of current importance, such as renewable energy versus coal, organic food versus genetically modified food, as well as plastic pollution and water justice.

“Art is a powerful medium.  We are living through a climate and social emergency and our youth must be involved in the revolution. We need to step aside as adults and let the young learn to lead, because the elders continue to make selfish decisions that destroy the planet, which in turn will affect their future livelihoods,” says Zahara.

During this workshop, artists and activists – including radical eco-warriors, cultural and creative experimentalists, art schools, and a few organisations – mentored the youth and community members at a variety of break-away stations. They creatively explored different ways to artistically express their understanding of the dangers of climate change and other environmental concerns, how they impact society and contribute towards real-life challenges. This also included visual art, performance art and other craft mediums. 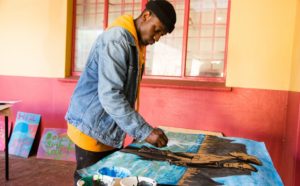 Alex Lenferna, Climate Justice Campaigner for 350 Africa says, “We want to be part of the solution. What we need from the government is a clear and ambitious plan to urgently address climate change under the auspices of a global climate emergency. As Africa’s biggest carbon emitter, South Africa needs rigorous energy policies that will facilitate reducing our footprint and preserving the planet for future generations.’

The event also included an outdoor mural painting initiative at Community House – led by Western Cape-based street artist Prefix 66 – as well as a pop-up film festival on Water Justice, hosted by the Athlone Cultural Hub. These activities ran concurrently to the break-away group sessions. In addition to this, a DJ also hosted an open-mic session – themed around ‘Songs for the Earth’ – for children to create and perform songs and poetry.