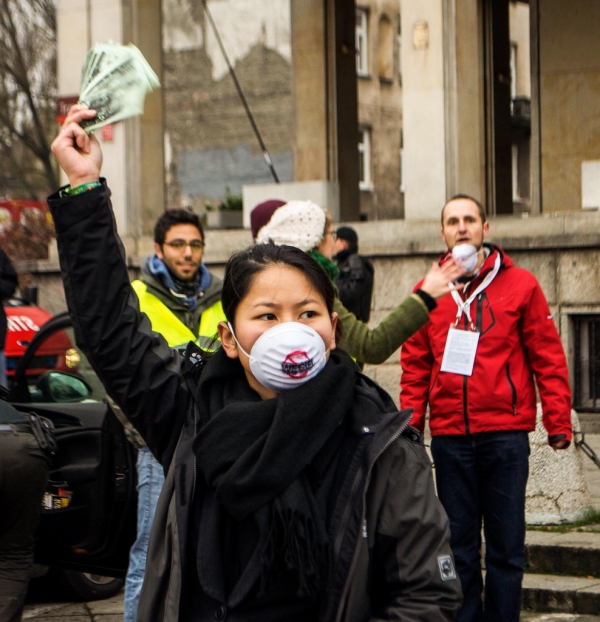 As Australia continued to come under fire for obstructing international climate talks, civil society groups from across the world introduced a ‘People’s Communique on Coal’ into the UN climate summit that concludes this Friday.

The climate talks have been overshadowed by the controversy of the Polish Government supporting a “coal and climate” conference on the sidelines.

The groups, from local community organisations, to regional networks and large international NGOs, released the statement today to highlight the need for an immediate and absolute just transition from coal, in order to confront the climate crisis.

“Australia has sent its coal corporation’s representatives to Warsaw, instead of the humanity and compassion of its citizens,” said Lidy Nacpil, of Jubilee South, Asia Pacific Movement on Debt and Development from the Philippines, and a leading organiser of the international statement.

Given that emissions from burning coal are the single biggest human source of climate changing greenhouse gases, the communique says that, the push for Coal is a betrayal of the commitment and obligation of governments under the United Nations to address climate change and shift to sustainable pathways.”

“This people’s declaration on coal makes clear that in every country we demand a just transition to renewable energy controlled by people. That in every country we reject coal that hurts our health, that destroys our rivers and mountains, and that contributes to the climate change driving extreme weather like Typhoon Yolanda,” Ms Nacpil said. 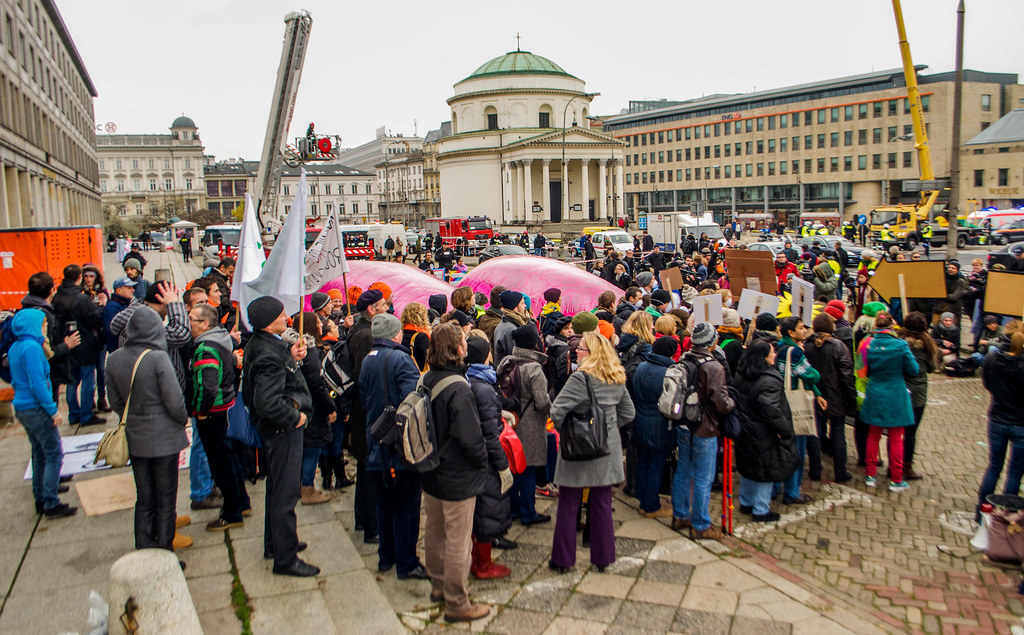 The declaration comes out of Reclaim Power – a global month of action on energy, which occurred throughout October and highlighted resistance against dirty energy that is driving climate change and proposed clean, people-controlled solutions.

“Africans are choosing a better, cleaner, safer and more democratic future by rejecting coal. Our ministers must do the same at the Warsaw conference, and not let the dirty coal lobbyists dressed up as Australian government officials get in the way of urgent, immediate, emission controls by developed countries and a ban on new fossil fuel projects.” Robert Chimambo, the Zambia chapter of the Pan African Climate Justice Alliance (PACJA), said.

Jagoda Munic, chairperson for Friends of the Earth International said: “The Polish government should act in the interests of Polish people, not corporations. We are calling on them to act as a leader in Central and Eastern Europe and transition to a just, clean renewable energy future, not one dominated by dirty coal.”

“King Coal is dead, but his zombie marches on. Today, activists rallied outside the coal summit happening alongside the UN climate conference to expose the industry’s blatant attempt at greenwashing. It’s either coal or the climate – this industry has no future on this planet,” Jamie Henn, Communications Director for 350.org said.

Christiana Figueres, the executive secretary of the United Nations Framework Convention on Climate Change (UNFCCC), who delivered a strong message before the world’s largest coal companies, senior policymakers and business leaders attending the coal summit, said their industry “must radically transform and diversify” to avoid the worst impacts of climate change.

“Let me be clear from the outset that my joining you today is neither a tacit approval of coal use, nor is it a call for the immediate disappearance of coal. But I am here to say that coal must change rapidly and dramatically for everyone’s sake,” Figueres said in her speech.

The World Coal Summit is taking place shortly after the release of the findings of the UN’s Intergovernmental Panel on Climate Change (IPCC), which shows that human-generated climate change is real and accelerating, and overlaps with the second week of the UN Climate Change Conference in Warsaw. 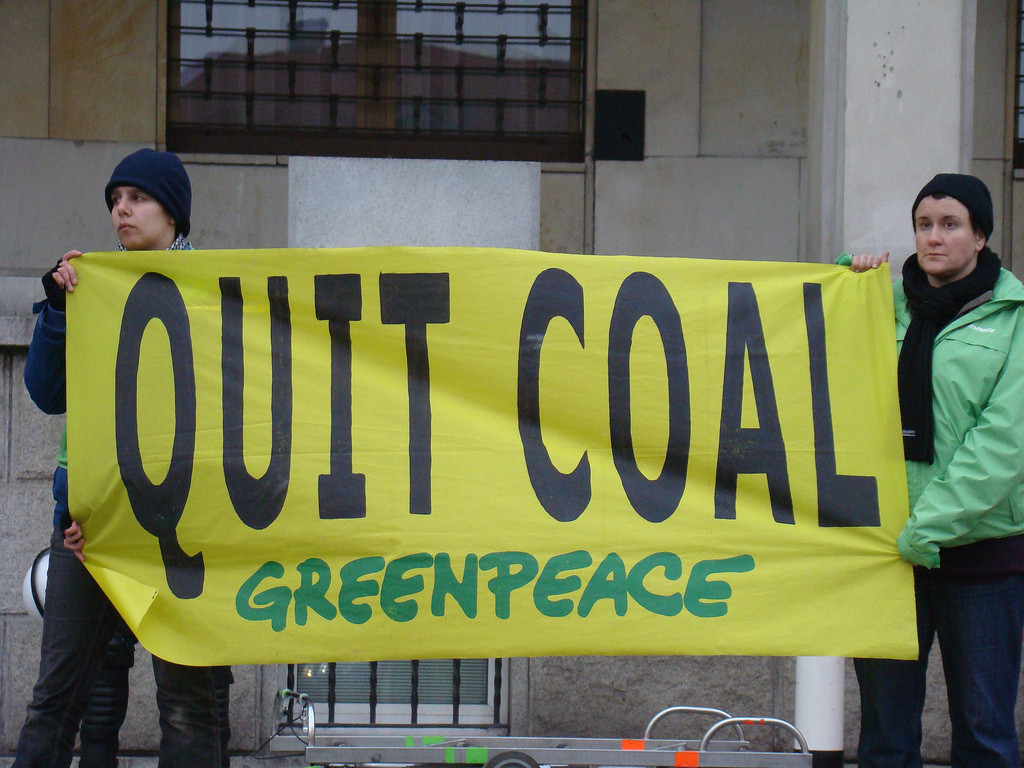 “We are at unprecedented greenhouse gas concentrations in the atmosphere; our carbon budget is half spent. If we continue to meet energy needs as we have in the past, we will overshoot the internationally agreed goal to limit warming to less than two degree Celsius,” the UN climate chief said.Figueres said the industry would need to diversity its portfolio beyond coal–that is, investing in renewables.

“Some major oil, gas and energy technology companies are already investing in renewables, and I urge those of you who have not yet started to do this to join them. By diversifying your portfolio beyond coal, you too can produce clean energy that reduces pollution, enhances public health, increases energy security, and creates new jobs,” she said.

Outside the Ministry of Economy building where the coal summit is being held, various civil society groups led by Greenpeace staged a rally and unfurled a big banner which stated, “Who rules Poland? Coal industry or its people?”

“We would not like events promoting the most polluting of industries to become associated with solving climate change,” Greenpeace said in its statement sent to the UN climate chief to show its disapproval of the parallel holding of the UN climate talks and the coal summit.

Gerry Arances, national coordinator of the Philippine Movement for Climate Justice, said coal is not the solution to address climate change and energy crisis.

“We are already feeling the impact of climate change in the aftermath of Typhoon Haiyan. The proliferation of coal industry in the world would not only damage our environment but our lives and those of the future generation. We are already suffering from the climate crisis,” Arances said.

Climate activists also held a small protest inside the stadium where the climate talks is being held, saying that the hosting of the Polish government of the coal and climate summit is “unacceptable and an embarrassment for the country.”