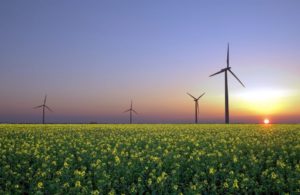 It is crucial that young women be inspired to enter the energy and science sectors at an early age, while still in primary school, because often by the time they reach high school their attention is drawn to the commercial sector, says Dr Thembakazi Mali, Interim CEO for the SA National Energy Development Institute (SANEDI), who adds that while there is an increase in the number of women in leadership and influential positions in the energy sector globally, the rate of increase is too slow.

In honour of International Women’s Day on 8 March, which celebrates the achievements of women and marks a call to action for accelerating gender parity, Dr Mali says, “So many young girls are not aware of the vast range of career choices that are available to them as scientists and engineers – they are certainly not restricted to plants or laboratories, as they might imagine. SANEDI believes that far greater awareness of the exciting opportunities in the energy and related sectors must be created by government and the private sector among young women in particular, to speed up the rate of increase in their numbers.” This is not something that can be done by SANEDI alone, she says, and encourages industry to add their efforts to inspiring and supporting young women to join the sciences.

“Energy is an exceptionally exciting field with plenty of opportunity for success,” says Dr Mali, whose PhD is in Chemistry, “and like anything in life, you have to work hard and know what to focus on.”

Nyeleti Mashele, now 17 in Grade 12 at Sir Pierre Van Ryneveld High School in Kempton Park, is well on her way to joining the ranks of women in leading positions in the energy sector, having won a significant SANEDI-sponsored science project award last year.

Nyeleti had initially set her heart on a career in medicine as a cardiologist, when two years ago, her Grade 10 life sciences teacher inspired and motivated her towards the sciences – and her focus shifted. Her future plan now is to study to be a climatologist.

In Grade 11 her family moved to Olifantsfontein, and as Nyeleti travelled to and from school daily, her attention was drawn to the large number of factories and smoke stacks in the area, discharging their pollutants into the atmosphere. At the same time, learners were invited to develop projects for the Ekurhuleni Region: Eskom Expo for Young Scientists 2018. Combining her burgeoning science knowledge, her newfound passion for environmental science, and her growing understanding of the impact carbon dioxide (CO2) emissions from factories have on global warming and climate change, she set her mind on finding a solution. 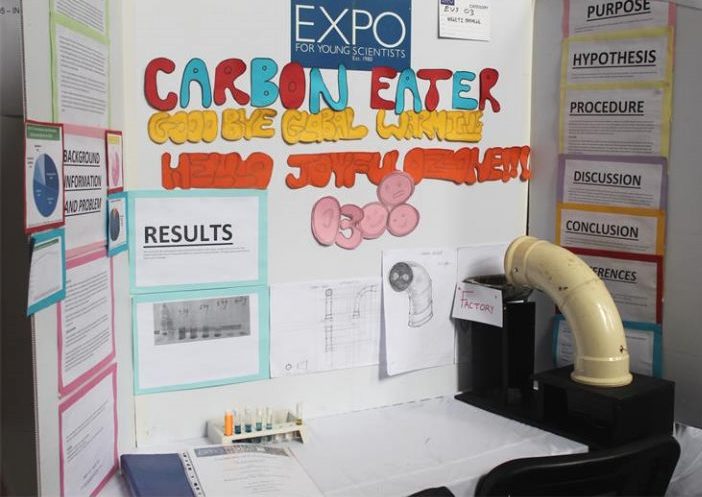 Nyeleti developed the aptly named innovative Carbon Eater, which aims to absorb CO2 emitted by factories during the combustion of fossil fuels, thus mitigating against climate change. She explains, “I collected the results by recording the change in colour that occurred in the sodium hydroxide when it reacted with different amounts of CO2, and I also established that the resulting sodium carbonates collected at the end of the process can be used to manufacture products such as glass, paper, soaps and detergents.”

The Carbon Eater impressed the judges at the Young Scientists Expo to the extent that she won the Best Female Project Award, and was presented with a prize of a tablet, a solar lantern, and SANEDI apparel worth R3 000 sponsored by SANEDI. In addition, Nyeleti achieved the Carbon Capture & Storage (CCS) Special Award, and also received mentoring and guidance from SANEDI ahead of the International Science Fair in Johannesburg in October 2018.

Nyeleti was thrilled with her “unexpected” win and says that SANEDI, which subsequently invited her to the Carbon Mineralisation Workshop 2018, has already taught her a lot. “SANEDI has helped to guide my career and has given me a clearer perspective of the need for better management of carbon emissions in South Africa. I didn’t know that such a company existed before, and I can see it is making a difference.” SANEDI will continue to advise Nyeleti with regards to her invention. 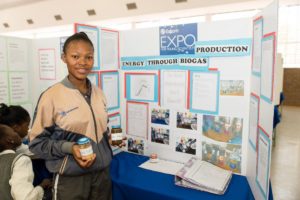 Dr Mali says, “We support Nyeleti’s project as it is in line with Carbon Capture Storage and Utilisation. CO2 can be captured from industrial sources such as power plants, steel or cement works, or collected from the air. The CCS project looks into capturing and storing the CO2 in appropriate geologies within the country. The Carbon Eater then, using chemical processes, can extract the carbon from the mix of gases and particles, providing the raw material for new products.”

Dr Mali explains that the use of CO2 as a feedstock raw material for new products is not a new idea, and has been the focus of research for 40 years. “While some products are being widely tested and will be on the market in the next few years, others are still in the lab. The scientific and engineering challenges of CO2 utilisation are substantial, but the potential benefits are as large, or larger. If we can solve these challenges and streamline the process and lower costs, CO2 utilisation could completely reinvent a chemicals industry that is tied to fossil fuel and petroleum feedstocks. This would provide us with a secure source of chemical raw materials for the future, and in doing so would not only reduce the industry’s carbon emissions, but provide a means to safely turn the carbon dioxide warming the atmosphere into useful products.”

Dr Mali adds, “SANEDI is very proud of Nyeleti’s achievement – she has a real depth of understanding of the dangers of global warming and was clearly a worthy winner of the prize. We will no doubt see a lot more highly innovative thinking and hard work from her in the future.”

Nyeleti says she is encouraged to see that doors are open to women achieving a lot more in the fields of science today than they have been in the past, but was quick to point out that in many of South Africa’s rural areas there are thousands of girl children who are not getting the education they deserve at a basic level. “Women can achieve anything they want to, but they cannot achieve if they are not educated. They need to get the message that they must be educated – they must work hard and be inspired. That is the way to a brighter future for the country.”