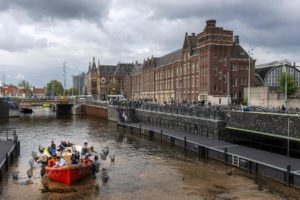 It’s not fish they’re hunting on their cruise along one of the Dutch capital’s most famous tourist attractions — it’s plastic.

With eco-tourism booming around the world, the canal cruises run by the Dutch group Plastic Whale are reeling in big business.

“Obviously you’re on the beautiful canals of Amsterdam in a really nice boat, but at the same time you’re active as well, and you add something positive to the canals and to the city because you’re making it cleaner.”

Smit set up the company eight years ago, aiming to create “economic value” from the plastic waste the tours dredge from the canals.

Plastic bottles are separated from the rest of the trash and are then recycled to be used in office furniture — or in building more Plastic Whale boats.

In 2018 the Plastic Whale cruises, which also run in the port city of Rotterdam, drew 12,000 visitors and this year they expect more, said Smit.