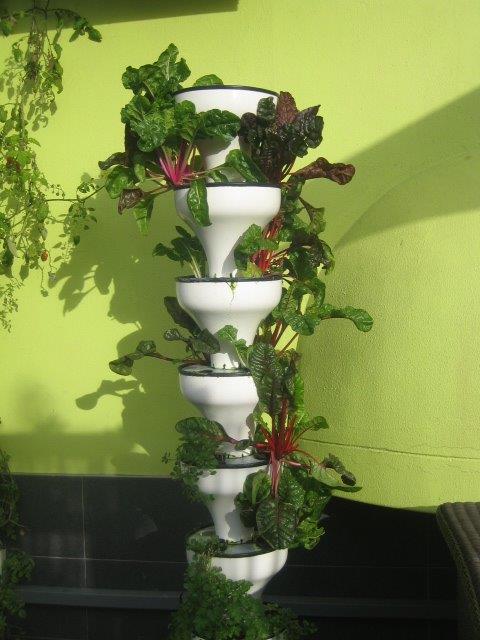 When a local green hotel receives the honour of becoming the first Elite Platinum building on the African continent, there is cause for celebration.

A celebration which we were happy to share, inspired by a range of magnificent green tweaks which confirms that indeed the world is changing and all the hard work in the green industry is not in vain.

Hotel Verde also celebrated its first birthday in the month of August, having achieved many awards in its first year of operation: the Enviropaedia Ecologic Award for Water Conservation, Eskom’s Energy Efficient Award for Commercial Building and the Intermorga Company Trendsetter Award.

Only platinum hotel in Africa

There are 31 500 projects that qualify for the Heritage Environmental rating system, but only 12% have received Platinum.  Hotel Verde is the only Hotel on the Continent with a Platinum rating, making it the Greenest Hotel in Africa. What an outstanding achievement!

To achieve this award they had to comply with 6 categories:

This is of course in line with their mission statement and ethos to tread lightly, reduce their impact on the environment and their carbon footprint.

The attention to detail was evident from the basement up, starting with brightly painted graffiti walls of nature scenes in the underground parking area. Apart from fascinating green installations, which we have featured before (see here) I was particularly interested in a wide variety of eco art. 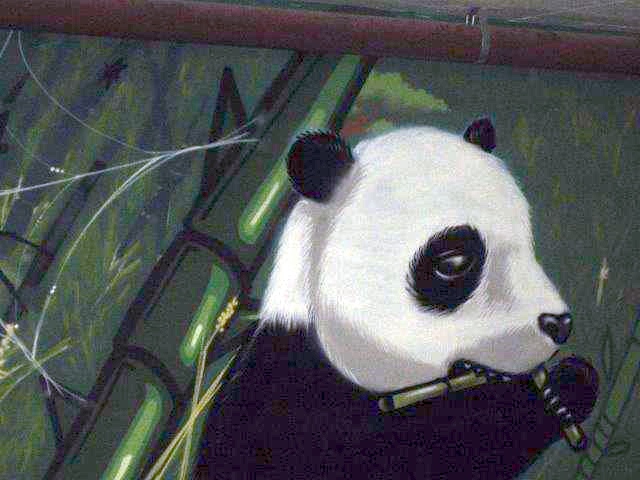 Outside the front entrance we were met by a rich ochre and mustard coloured mosaic panel, designed by Niklas Zimmer, Candice Turvey & Svenja Delicio, of the four sustainable energy sources that are implemented at the hotel – soil, water, sun and wind.  This installation adds a magnificent texture to the front façade. 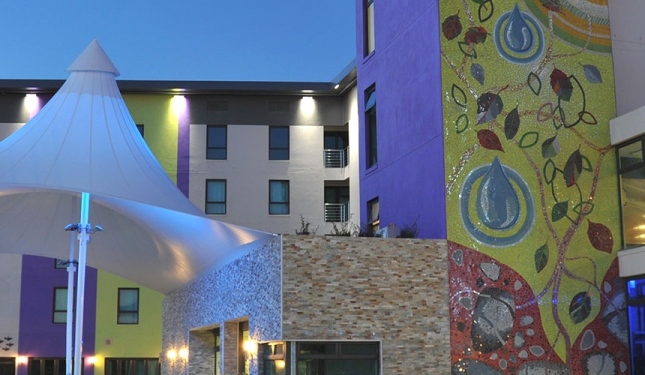 Entering the hotel you are welcomed by the quirky “Uncle Verdo,” a scrap metal sculpture by Trevor Potter. Close by is a dancing lady sculpture “Verdette” by Gerd Bruns, made from wood from a nature reserve bushfire near Citrusdal. 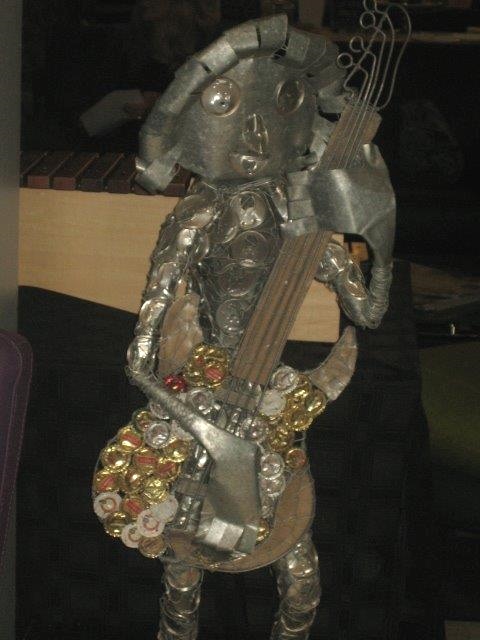 Take a look at the unique kinetic installation of riverbed pebbles hanging gracefully from strands of string, threaded through a central controlling area, called ‘Convection’ by James Fiske. When the controlling wand is lifted and turned the pebbles move in a gentle motion mimicking a meandering river. Then there is the very beautiful ”Sacrum Simulacrum no.6” by Barbara Wildenboer. These 3 oval frames are made of intricate Kirigami cutwork of recycled atlas pages, layered around a clock mechanism. The colours of the maps have faded and create a calming, classical feel, symbolising the migration of birds. 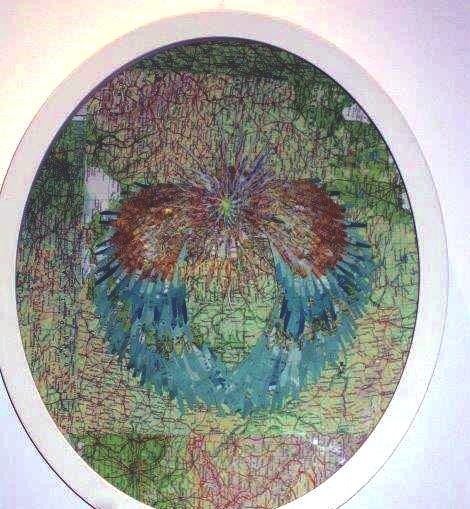 Each area featured local art – some produced by learners from local schools in the immediate area of Khayelitsha, adding South African soul to the hotel.

All guests received a solar energy jar “time capsule”, into which we placed our promises towards helping the Earth. The plan is to invite everyone over a year later to see whether we had honoured our commitments. 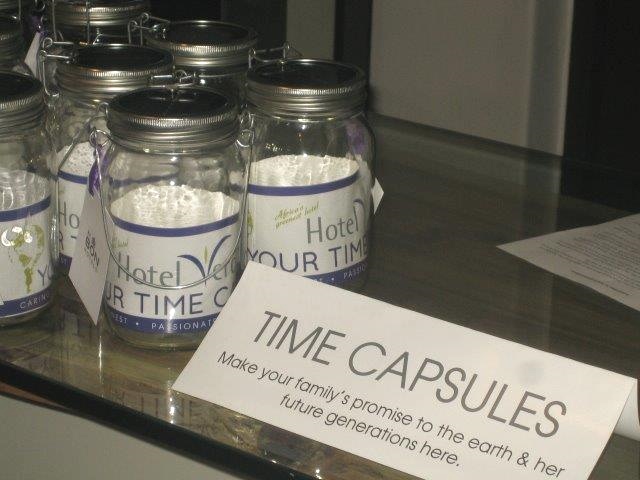 Each Wednesday evening the hotel has an Earth Hour, which takes place from 6.30 till 8.30, during which all the lights on the ground floor are turned off, and candles and solar lamps are used to light the area.  During this evening at 6.30 the lights were extinguished and solar-lamps provided soft lighting for our dinner.

Here we tucked into an abundant buffet of interesting South African dishes, where they also catered for vegetarians and a magnificent collection of fresh vegetables and salads, many of these picked from their hydroponic veggie garden just beyond the kitchen.

What are the green principles behind the running of this kitchen, we wondered? The next morning we had breakfast next to one of the most beautiful eco pools ever. And there the black board revealed the food miles of their supplier chain.

Hotel Verde believes in responsible procurement. All suppliers are chosen based on their awareness of the environment within their own practices, as well as being local and close to the hotel to reduce the carbon impact of transportation. All suppliers used by Hotel Verde can be found within 160km from the hotel. All packaging delivered from their food suppliers are emptied and returned to be reused instead of thrown away. 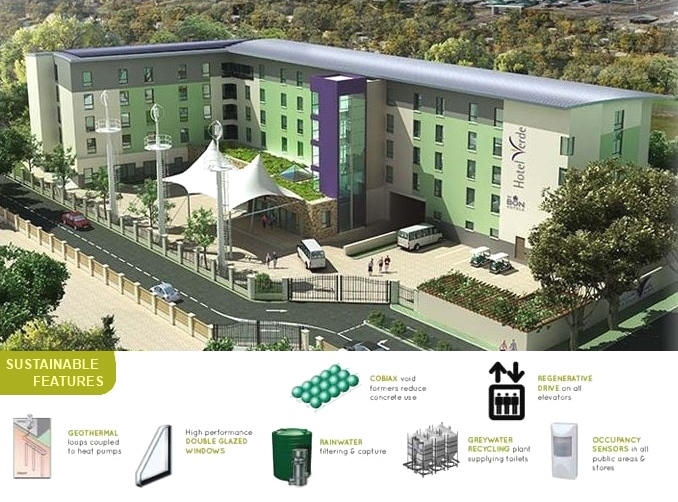 Hotel Verde is an inspiring example of where we hope all hotels are heading. A green pathway to contribute towards the longevity of this planet.