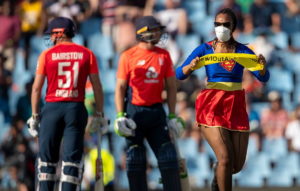 Last weekend, at least six Greenpeace Africa activists wearing superhero costumes leapt onto the SuperSport Park cricket field during the international T20 match between England and South Africa. Their mission was to hand the Proteas captain Quinton de Kock and his team an air pollution mask.

This follows the release of a new study by Greenpeace Southeast Asia and the Center for Research on Energy and Clean Air (CREA) on 12 February, which highlighted the global cost of air pollution from burning fossil fuels, including a shocking 13 000 premature deaths in 2018 in South Africa alone.

“The players on the field and the fans in the stands alike are being poisoned as we speak – simply by being outside. Burning fossil fuels continues to be a strain on our health, our money and ultimately our lives. Sports enthusiasts know that perfect health is paramount for performance, and the same is true for our sporting heroes. Fighting for the right to clean air is critical to protect ordinary South Africans’ health, the health of our children, and even the health of the teams that we support. Today, activists from Greenpeace Africa are standing up for the right of all South Africans to breathe clean air,” said Nhlanhla Sibisi, Climate and Energy campaigner for Greenpeace Africa.

Toxic air is not a game

Another team of activists dropped a banner from a floodlight in the stadium next to the scoreboard that read: “Toxic air is not just a game #BowlOutAirPollution,” highlighting the danger that air pollution poses, even to our sporting heroes. The activists aimed to spotlight the devastating impacts that air pollution can have on people’s health.

Earlier in the week, Greenpeace Africa delivered packages to the team doctors of South Africa’s major sporting teams containing air pollution masks and a letter asking for the doctors to take the threats of air pollution seriously.

“Greenpeace Africa believes that our right to clean air is constantly being undermined by mega coal polluters like Eskom and Sasol who have driven South Africa into an air pollution crisis. Nobody is immune to South Africa’s toxic air – not even superheroes. The cost of air pollution is high, and we are paying the price with our health,” continued Sibisi.

The extent of South Africa’s air pollution crisis is consistently being exposed by civil society. In 2018 and 2019 successive Greenpeace studies identified Mpumalanga as a hotspot for NO2 and SO2 pollution. These findings were highlighted against the backdrop of the escalating climate emergency across the globe.

Greenpeace Africa believes that both crises share the same solution: an urgent shift away from fossil fuels and towards renewable energy in a Just Transition. Greenpeace Africa currently has a petition calling on Minister of Environment, Forestry and Fisheries, Barbara Creecy to take urgent action to tackle South Africa’s toxic air.

“To make sure there is never a day when we can’t run outside anymore, we must make our air safe again. We cannot accept dirty air as our daily reality anymore. Greenpeace Africa demands that Minister Barbara Creecy takes urgent action to put an end to the pollution that is increasing our risk of stroke, lung cancer, asthma and even premature death,” ended Sibisi.