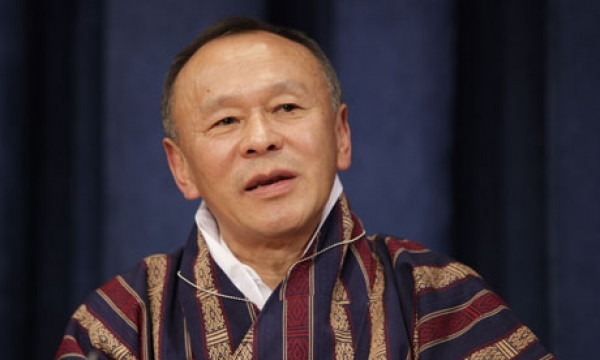 “One of the world’s biggest myths is that going organic is a choice. From the perspective of food security, there is no choice.”

At this Sustainable Development Learning Event, the following statement was issued by the prime minister of the Kingdom of Bhutan, His Excellency Jigmi T. Thinley:

No other kind of security

‘It really is as straightforward as that! Even military experts have written that the ability to feed one’s own people in a time of global instability, conflict, and insecurity is more important for national security than any army or military might. The United Nations itself has said (and I quote) “Fertile land with access to water has become a strategic asset.”’

‘And yet, increasingly, we cannot take that most basic of all securities for granted. Globally, soils are eroding much faster than they can form. According to one Cornell University study, India and China are losing soil 40 times faster than it is replenished, with 30% of the world’s arable land rapidly becoming unproductive due to erosion. It takes 500 years for a single inch of topsoil to form, yet the planet is losing 24 billion tons of it every year.’

‘But it is not only erosion and outright soil loss that threaten the world’s food security. Land is being severely degraded through nutrient depletion, biodiversity loss, acid rain, and soil compaction. Agricultural chemicals are polluting water sources. Insects are becoming resistant to pesticides. And, even as 1.3 billion of the world’s people will go to bed hungry tonight, more grain is now being fed to cattle and cars than to people.’

‘Food, says Lester Brown, “the foundation of civilization, is crumbling.”’

‘It doesn’t have to be that way! And there is only one way for it not to be that way! That is through making agriculture genuinely sustainable ― working with nature to enhance rather than degrade our precious soil and water, and to farm in such a way as to enrich rather than deplete soil nutrients.’

‘I think one of the world’s biggest myths is that going organic is a choice. From the perspective of food security, there is no choice. Simple survival ― and what Lester Brown calls “civilization” ― demand it and require it. Food security is that basic, and what you will discuss in this IFOAM learning event here today should be the basis and starting point of all that will occur in the Summit that begins here tomorrow.’

We can live in harmony with nature

‘What the world’s leaders would learn, if they were here with you today, is a message not of despair but of real hope: ― That humankind has the ability to feed everyone on earth healthily and sustainably. That no-one need go hungry or live in grinding poverty. That sustainable farming is fully viable economically just as it is an ecological imperative. That it will improve our health and enhance our quality of life. That we can live, and live well, in full harmony with nature.’

‘Indeed, the world’s leaders need to listen for another very practical reason too. More than half the population of most countries represented here at Rio live off the land. In my own country, as in many parts of Asia and Africa, nearly two-thirds of our people are farmers. If we are to represent our own people faithfully, we all need to learn what you are offering here today.’

‘And beyond these most basic of all necessities ― food and farming as “the foundation of civilization” ― there is another, equally hopeful yet perhaps more subtle, reason that I am so grateful and happy to share my first formal Rio engagement with you. Even as I pray that the Summit about to start tomorrow will produce the decisive action needed to save life on this planet, we here know that critical action, guidance and advocacy have come and will continue to come from you and other key civil society groups like yours.’

‘Indeed, what I find most encouraging in this moment of life-threatening planetary crisis is the powerful surge of activity from civil society movements around the world ― taking the lead where governments fear to tread, and giving courageous expression to humankind’s basic goodness and inherent wisdom. This energy will and must generate the political will to act.’

‘We could not have experienced or witnessed a more powerful expression of that people’s dynamic than at the United Nations headquarters on 2nd April this year where we launched a major initiative for a new development paradigm. Setting human happiness and the wellbeing of all life on earth as its goal, the key conditions identified for the new paradigm are ecological sustainability, fair distribution, and efficient use of resources. The new model calls for a healthy balance among natural, human, social, cultural, and built assets.’

‘That day at the United Nations, it became clear to all present that what we need to do is far more than simply tinkering with the present system, which sadly is what characterizes so much of the mainstream dialogue on the so-called green economy or sustainable development.’

A real and viable alternative

‘We agreed, instead, on the need for a real and viable alternative to our conventional economic system which, fuelled by mindless consumerism, has depleted resources, degraded ecosystem services, accelerated greenhouse gas emissions, diminished biodiversity, and now threatens the survival of humans and other species on the planet. We acknowledged that this present system has created yawning inequities, and is generating global economic insecurity, indebtedness, instability, and conflict.’

‘While we were deeply honoured on 2nd April to be joined by the President of Costa Rica, the United Nations Secretary-General, and ministers and diplomats from around the world, it was also quite clear that the real energy, dynamism, vision, clear thinking, and heart-felt will to act emanated that day from the hundreds of civil society leaders and brilliant scholars and analysts who participated with admirable enthusiasm.’

‘And so it is to you that we politicians must look to continue to take the lead; to persuade, push, and cajole governments to act; and above all to set an example as you, indeed, are doing so magnificently ― showing in actual practice what works, and demonstrating convincingly how to live life well in harmony with nature. That example truly matters.’

Sustaining the flow of nature’s bounties

‘I cannot imagine, for example, Dr. Vandana Shiva`s work carrying the extraordinary weight it does worldwide, if not for her superb Bija Vidyapeeth organic training farm in Dehradun in India. That’s where we have sent our own Bhutanese farmers and agriculture officials for hands-on training, and it’s from there that top farmer trainers and soil scientists are regularly despatched to Bhutan to train our own farmers in organic methods. We have learned so much from them ― perhaps, most importantly, that going organic means very much more than just not using chemicals; that organic is a whole system of working intelligently and with deep understanding of nature. Our farmers are being convinced that by working in harmony with nature, they can help sustain the flow of nature’s bounties.’

‘What I am saying here is that ― even among the powerful civil society movements ― your work and the work of the International Federation of Organic Agriculture Movements stand out. This is because you are actively and literally sowing the seeds, nurturing, growing, modelling, and putting into practice the new society of the future, whose power, paradoxically, stems from its root in the most ancient wisdom!’

‘And so, as we promote the new development model that the world so urgently needs, one of our best ways to demonstrate its practical viability and to fend off possible accusations of finger-painting in the sky, is to point to earthy, living models like your highly successful work in organic farming. And I am using the word “earthy” in both senses of the term! Your work provides solid ground on which to stand!’