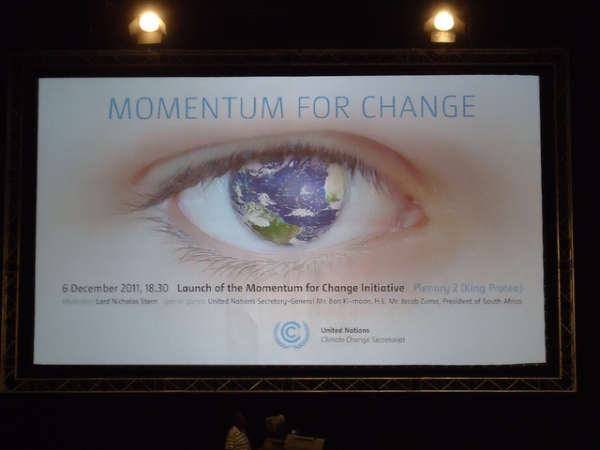 The UN Framework Convention on Climate Change has a plan which aims to increase innovation, hope, passion and momentum for action against climate change. They plan to do this by acknowledging the already increasing momentum of stronger local, regional and national action, highlighting actions in the field of climate change mitigation and adaptation.

benefits to the poor

The “Momentum for Change” initiative is seeking applications for climate change mitigation and adaptation activities that have delivered social and environmental benefits to the urban poor in a developing country, as part of a cooperative effort between the public and private sector. The deadline for applications is 13 July 2012.

“It is time that we recognize the extraordinary work taking place at the local, national and regional levels by those committed to tackling climate change. Momentum for Change aims to shed a light on existing efforts to creatively and effectively respond to the climate challenge,” said UNFCCC Executive Secretary Christiana Figueres, the UN’s top climate change official.

A small number of these will be chosen by the Momentum for Change Advisory Panel as the 2012 Momentum for Change activities, and will be presented at COP 18/CMP 8, in Doha, Qatar from 26 November to 7 December 2012. These projects, as well as those which are considered to have met the basic eligibility criteria will also be displayed on the UNFCCC web site and via various media channels.

Momentum for Change was launched at the UN Climate Change Conference in Durban, South Africa at the end of last year.

Projects showcased in Durban in 2011 included:

“Following the successful launch in Durban, Momentum for Change provides an opportunity for governments, civil society and the private sector to remain inspired and committed to further success in Doha,” Ms. Figures said. “I am convinced that the partnerships we plan to showcase through Momentum for Change, will help us remain focused on the long-term challenge to address climate change,” she added.