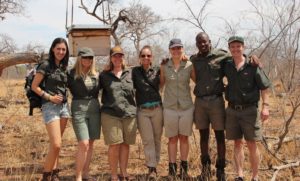 “Mama Africa takes your breath away with her magnificent sunsets and sunrises, leaves you speechless at her amazing wildlife and her boundless energy, and reawakens emotions that you thought had long-since disappeared,” says Durban’s Geyser. “Yet, amidst all this splendour, there is a sad, ugly reality – a festering wound of poaching, over-population, poverty and human-wildlife conflict.”

The figures are alarming: poachers kill approximately two rangers every week in Africa; they also kill on average 3 rhinos , 98 elephant and countless pangolin every single day. It is this harsh cold reality that spurred Geyser into action. “For most people on our planet, disaster on this scale is overwhelming so they resign themselves to shake their heads in dismay and leave the job of saving our people and wildlife to someone else. I have learned over the last few years that we simply cannot rely on ‘the other person’ or the next generation to take up the fight, it has to be us and it has to be now; we simply don’t have the time. And 12 brave women from around the world felt just as strongly as I do to leave the comfort of their homes and journey with me to make a difference” explains Geyser. 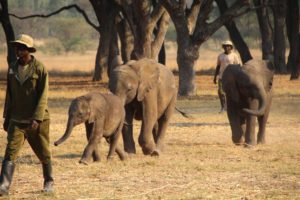 One of the highlights for the team was interacting with rescued elephants at the Wild Is Life sanctuary in Harare, Zimbabwe.

In the seven weeks that followed, Geyser and her crew, who joined her on different ‘legs’ or sections of the expedition, distributed 30 000 educational booklets, visited 13 on-the-ground conservation projects and met 16 phenomenal women who are doing incredible conservation work at a grassroots level.

“So many lifelong memories were made on the journey,” explains Geyser, “but a few stand out more than others. Meeting the world-famous Black Mamba Anti-Poaching Unit here in SA is one of my favourites. This elite group made up of 33 women protects the boundaries of the 52,000ha Balule Nature Reserve, which is part of the Greater Kruger National Park. As proud defenders of our wildlife, these women are incredible role-models; and they are mothers, sisters, wives and future grandmothers too.”

Spending time with the Eco-Exist educators and community officers in rural schools in the eastern panhandle of Botswana to learn about their daily challenges with elephants that raid crops and subsequent injuries and deaths of local community members was also memorable. “We saw a herd of over 400 elephants crossing the road, so it’s easy to see why people living in the area are so nervous and resentful of elephants,” says Geyser.

Highlights for other crew members include meeting two of the brave Chobe Angels in Botswana. Kedi and Flo shared remarkable stories of bucking gender discrimination and gender stereotypes to prove that women are just as capable of tackling wildlife issues as men. They are part of an incredible guiding crew of 22 women from Chobe Game Lodge who are committed to conservation efforts.

“I learnt so much on my trip starting with our visit to Wild is Life and meeting Roxy Danckwerts and Angela Loubser where I got to see my first elephant, giraffe, lion and pangolin,” says KZN’s Celokuhle “Smax” Biyela. “I witnessed a love that cannot be described from each member of staff who worked with the animals and how they treated them stirred something so deep within me that made me want to fight for my children and my grandchildren and generations thereafter to experience what I was not just in the sanctuary but in the wild.”

The women also fondly recall the warm welcome they received from teachers and children at the A.Gariseb Primary School in the Damaraland, Namibia; meeting solo travellers and conservation champions from Germany and the U.K who had self-funded their trips to do their bit for the environment; and witnessing the success stories of the various initiatives spearheaded by women in the four countries.

“Joining the Rise of the Matriarch Expedition and being part of the movement to empower women in wildlife conservation has been one of the greatest adventures of my life,” says Jennifer Palmer (USA). “I feel I am now part of an extended network and family of courageous change makers who are bonded together by our love of wildlife, Mother Africa, exploration and a deeper calling to boldly live life to the fullest.”

The conservation mission wrapped up on 28 October 2018. For Geyser, being back home means time to reflect and then plan the next Journey with Purpose. “It was an extraordinary journey. Meeting the phenomenal women who are giving it their all to help save our planet, restored my faith in humanity. Many hands working together can make a difference which is why the planning phase for the next mission is already underway!”