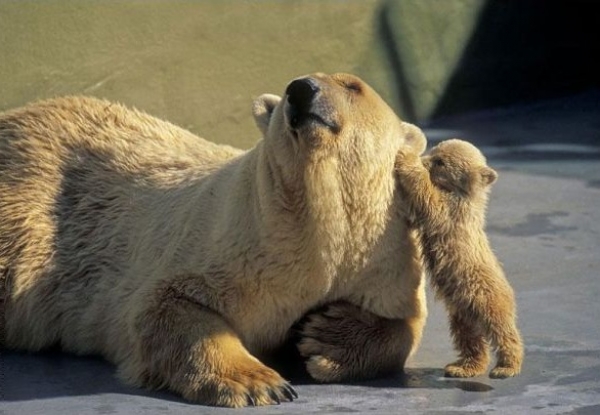 For anyone who enjoys the company of animals and an appreciation of nature, the lament, “If only they could talk!” often voices itself. Consider that “they” not only can, but do talk. There exists a universal language beyond words – an energetic communication between members of different species.

Focusing only on the biological aspect of an animal, while fascinating and wondrous in itself, can place one in the ruts of conventional notions and inhibit true seeing of the animal’s personality and life experience. We can learn so much from and about the animals in deeper ways than through physical observation alone. Through direct communication, we are able to bridge the gap between the human and animal worlds.

Everyone can talk to animals

Animal communication is natural; everyone can talk with animals! Most of us have simply forgotten how, but can recall instances from childhood or other times in our lives when we’ve been connected to our intuitive abilities and have perceived things in a non-physical manner. We can all remember how to listen and perceive the true nature and essence of an animal’s unique personality and experiences. Remember “just knowing” when your childhood pet was hungry or thirsty, or in danger? Do you recall how they comforted you during sad moments, having read your mood?

Animals obviously communicate through physical action (“body language”) and their own complex languages (vocalisation). They also communicate silently through telepathy. People receive the messages to the degree they are listening, can tune in, or are receptive.

A vet recently asked me to communicate with a lethargic dog who hadn’t eaten for three days, but whose clinical examination and tests had revealed no clues. Faced with a myriad of obscure possibilities, it was imperative to find answers urgently. When I connected with the dog, I felt her internal symptoms as if they were my own – temporarily “borrowed” and experienced within my own human body. I then projected the silent mental question, “What causes this nausea?” In front of my mind’s eye floated the image and texture of fatty food, along with the sense that my (her) body couldn’t process fats properly.

The actual mechanism for this lies firmly in the scientific field of quantum physics. Biologist, Dr. Rupert Sheldrake, describes telepathy between humans and their pets in his acclaimed experiments. His findings prove that when a relationship exists between beings, they have direct access to each other’s thoughts.

Even neuroscience shows how thoughts and emotions literally generate an electromagnetic consequence in the brain. We can intentionally send thoughts or mental images to animals which they receive… remember the times you’ve quietly pondered taking the dog for walk and suddenly encounter an excited reaction at your silent mental musings from none other than the happy pooch?

Indigenous peoples around the world who live(d) close in harmony with the earth know of this, deeply and intrinsically. Our so-called civilized world and conditioning deafens our ears to the complexity all around us. Most of us are far removed from our hunter-gatherer origins; a time when we relied upon our subtle senses to track animals and navigate wilder lifestyles. By quieting our mind and allowing our intuitive senses to come into their own again, we can all access this ancient skill. It’s in our blueprint – our original design. What it really comes down to our willingness to listen again.

Interspecies communication is valuable in addressing the root cause that motivates actions. Understanding the core need that an animal is trying to convey through their behaviour allows us to deal effectively with the issue at hand. When we understand other species’ perspectives instead of anthropomorphizing or projecting our human interpretation, we can find much more sustainable solutions to the challenges of coexistence.

A little empathy for marginalised species like baboons might help us understand their challenges. Rather than labeling them “aggressive”, we might appreciate the lack of natural food or foraging ability (due to mountain fires, human encroachment, etc.), or their need to defend themselves against violent acts at the hands of humans. I’ve worked with many stabbed, poisoned, shot and otherwise injured wild baboons and have found them to be very wise, compassionate and intelligent beings with intrinsically gentle natures.

In South Africa alone, animal communication has contributed directly to the success of wildlife translocations, veterinary diagnoses, conservation research, rehabilitation and “rewilding” efforts. In a recent elephant translocation between reserves, we used animal communication to allow a large group of elephants to let us humans know who of their clan wanted to stay versus relocate. To those that chose to move, we conveyed that they’d have to do the counter-instinctive thing on capture day by running towards the helicopter and boma – obviously a scary prospect. The elephants did precisely that! Amidst all the noise and stress, those same individuals moved away from “safety” and the rest of the herd to facilitate their own capture. The entire translocation happened with great ease and success.

We can also extend the skill of interspecies communication beyond individuals to the environments in which they live. Whether it be a veggie patch, wildlife reserves or the health of our oceans, knowing how different species relate to each other and humankind is of obvious benefit to all concerned.

With increased awareness, closeness and empathy, we can appreciate the intelligence, beauty and wisdom of our animal friends and indeed all of nature. In the words of Henry David Thoreau: “What a wonderful miracle if only we could look through each other’s eyes for an instant.” 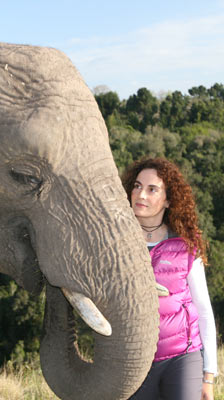 Anna is a professional animal communicator who has received advanced training through the Assisi International Animal Institute in California, USA and has been practicing for ten years in America, Canada and South Africa with domestic and wild animals. Her conservation experience includes working with cheetahs, lions, wolves and elephants in educational and rehabilitation programmes.