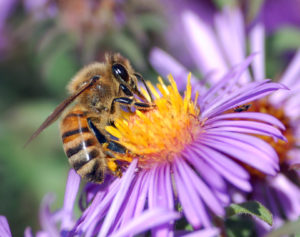 A European honey bee (Apis mellifera) extracts nectar from an Aster flower using its proboscis. Tiny hairs covering the bee’s body maintain a slight electrostatic charge, causing pollen from the flower’s anthers to stick to the bee, allowing for pollination when the bee moves on to another flower. Image: John Severns / Wikipedia

The great success in Bavaria, Germany, of the referendum “Save the bees!” shows that the saving of the bees and nature is a big concern for many citizens.

Populations of flying insects have declined shockingly by 75 to 80 percent since 1989.

The goal of the bill is to counter the loss of species, especially the decline of bees, bumblebees and butterflies, by adjusting agricultural use according to ecological criteria among other things.

But is it really enough to curb the use of insecticides, treated seeds and the early mowing of the meadows to save the bees?

Scientifically-based studies by researchers and biophysicists show another very serious cause of insect death: the artificial, human-generated electromagnetic fields, for example those from mobile transmissions, WiFi and cordless DECT- phones.

Prof. Martin Lindauer, one of the most important German-speaking bee and behavioral researchers, discovered that bees communicate with each other with the help of electromagnetic fields. They use the waggle dance to indicate to each other the direction and distance to good food sources. In 1974, Russian researchers Eskov and Sapozhnikov found that bees produce frequencies between 180 Hz and 250 Hz with the help of small magnetite crystals in their rump.

The data transmission of mobile communication takes place with a pulse frequency of 217 Hz and is exactly in the range of the waggle dance. This impairs the natural communication of the bees. The result: food collecting bees cannot tell each other correctly where good food sources are. Thus, the feeding of the bee colony is existentially endangered.

2. Mobile radiation leads to stress reactions and the doom of whole bee colonies.

For example, several experiments with continuous radio irradiation of hives in India, Russia and Germany have consistently shown that the exposure of radiation leads to increased stress reactions in the bees, which ultimately can lead to the death of the bee colony.

“In 50 Hz alternating fields with field strengths of 110 V/cm [electric field strength], the bee colonies in their habitation are very restless. The temperature in the hive increases significantly. The defense of social territory is increased so uncontrollably that members of the hive kill each other. They do not recognize each other anymore. After a few days of field influence, the bees remove their progeny out of the cells and new progeny is no longer created. Likewise, honey and pollen are consumed and then no longer collected.

The bee colony finally cements all the cracks and the entry hole with propolis [a resinous mass made by bees] to keep out the alleged ‘enemy.’ After cementing the cracks and the entry hole an acute lack of oxygen is created, and thus the bees try to create air with intense fanning. In the process, the wing muscles cause such high temperatures that the wax can melt. The bees try to cool down the excessive temperature by even more intensive fanning. The end is a ‘hyper activity’ of the hive, which means that all individuals suffer death by heat and suffocation.”

3. Mobile radiation severely impairs the orientation of the bees.

Different scientists have found that organisms at all levels, ranging from unicellular organisms, bacteria, insects, snails to vertebrates (e.g. whales or birds) can orientate themselves by electromagnetic fields, such as the Earth’s magnetic field or weather fronts and air mass-movements. All of these creatures have a compass system. For example, in the cell body of so-called magnetic bacteria iron-containing crystals act comparatively as a strong magnet.

These so-called magnetosomes act as a compass needle and align the cell always to the Earth’s magnetic field, so that they can move very straightforwardly and unerringly through their habitat. The zoologist and behavioral scientist Prof. Dr. Med. Wolfgang Wiltschko, and the biologist Prof. Dr. Günther Fleissner proved the magnetic sense of birds: Iron-containing magnetite crystals in the beaks indicate the intensity of the magnetic field to the birds.

So they know at every moment of their flight where they are currently located within their biologically stored earth magnetic field map. The renowned bee and behavioral scientist Prof. Martin Lindauer proved by experiments on bees that these also orientate themselves with the help of biomagnetite particles (Fe3O4) on natural magnetic fields. But if the natural ones magnetic fields are overlaid by artificial magnetic fields, then the calibration of the animals’ natural sense of compass is falsified, and this sets false directional impulses so that they lose their way.

Technical communication transmissions (e.g., mobile, satellite) massively disturb the energy and information lines of nature on which the animals rely on. A team of Indian researchers proved that the orientation of bees is affected the most by mobile phone radiation. In their experiment two mobile phones were attached to the sides of each of two beehives. Twice a day they were activated for fifteen minutes.

In a third hive, only mobile phone dummies were installed. Nothing was installed on the fourth hive. After 90 days, the two irradiated bee colonies were significantly smaller and honey production had ceased altogether. The queens averaged only 145 eggs per day, compared to 376 in the other hives. The working bees strayed around the hive disoriented. When they left, they returned less and less often. At the end of the experiment there was no honey, no breeding and no bees in the irradiated beehives.

“It is extremely alarming that dying is accompanied by symptoms that have never been described before. The immune system of the animals seems to have collapsed; some bees suffer from five to six infections simultaneously.”

But how can that be explained? The immune system works optimally only if cell communication is working properly. The diverse biochemical processes in the cells are controlled by means of electromagnetic pulses.

It is precisely these electromagnetic impulses that are massively disturbed by mobile communications, so that the biochemical processes within the immune system are waning. Bees get sick and die. This would also explain the strong parasite infestation of many bee colonies with the Varroa mite, which beekeepers and researchers have been fighting for decades. The disturbed bee immune system cannot defend itself anymore against this highly dangerous bee enemy.

We already exist in the mobile generations up to 4G. To now introduce a fifth generation with unevenly higher radiation exposure could mean the complete extinction of the bees. This requires an immediate and uncompromising rethinking by everyone, because our survival is dependent upon the bees.

Only together, in collaboration with all responsible citizens and politicians, can the bees still be saved. Therefore, the right and complete bill is needed at the upcoming referendum in Bavaria. But not only there. As a first step, dear viewers, please do inform your representative about the connection between bees and electromagnetic radiation. Because without the containment of human created transmission radiation neither bees nor human beings will be able to survive!