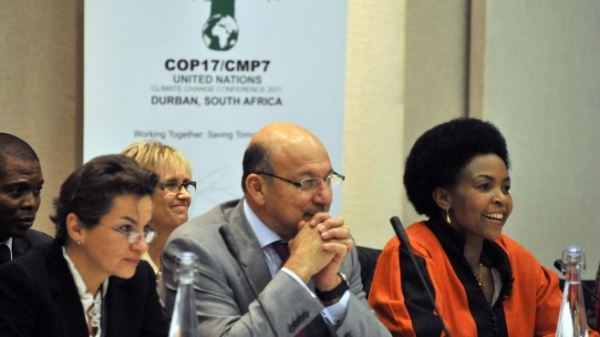 Against a background of record greenhouse gas emissions in the atmosphere, more frequent and intense extreme weather events, but also growing momentum for action to fight climate change, the UN Climate Change Conference in Durban (28 November to 9 December) kicked
off today.

At the start of the conference, South African President Jacob Zuma pointed to the climate impacts in Africa as a reason for all governments to take action.

“We have experienced unusual and severe flooding in coastal areas in recent times, impacting on people directly as they lose their homes, jobs and livelihoods. Given the urgency, governments need to strive to find solutions here in Durban. Change and solutions are always possible, and Durban must take us many steps forward towards a solution that saves tomorrow today,” he said.

A decisive moment for the future

The newly elected President of the conference, South African Minister of International Relations and Cooperation Maite Nkoana-Mashabane, stressed that Durban would be a decisive moment for the future of the multilateral rules-based regime. “In Durban, we need to show the world that we are ready to tackle and solve our very real problems in a practical manner,” she said.

According to the UN’s top climate change official, UNFCCC Executive Secretary Christiana Figueres, governments can take two major, decisive steps in Durban. The first step relates to completing the most comprehensive package ever to help developing countries adapt to climate change and to limit the growth of their greenhouse gas emissions, which was
decided at the UN Climate Change Conference in Cancun last year.

“The Technology Mechanism and the Adaptation Committee agreed in Cancun can be completed here in Durban so that they can begin benefitting people in 2012,” Ms. Figueres said. “And in Durban, the first phase of the design of the Green Climate Fund can be approved, as a major step on the road towards better supported climate action,” she stated.

Governments can ramp up funding

Governments can also ramp up funding towards the 100 billion USD of long-term climate finance they have already agreed to provide by 2020 and need to work out the “what” and the “how” for a  review agreed in Cancun that will assess the adequacy of a below 2 degrees Celsius temperature limit, including in relation to 1.5 degrees Celcius.

The second decisive step that can be made in Durban relates to how governments will work together to achieve their common goal of limiting the global temperature rise to a level which will prevent the worst ravages of climate change.

“This means, as a central task for Durban, answering the very important question of the future of the Kyoto Protocol. At the same time, governments will need to agree on how they want to pursue a broader framework to reduce greenhouse gases under the Climate Change Convention,” Ms. Figueres said.

Ms. Figueres drew attention to the fact that action on climate change is presently building nationally, regionally and at all levels of society, and that this positive momentum can feed into the UN climate change process.

“These negations are about securing a better future and improving the quality of life of people. The momentum for change is building, not least in developing countries. More can be achieved if governments and the private sector work in partnerships,” she said.

Together with the UN Secretary-General Ban Ki-moon and South African President Jacob Zuma, the UN Climate Change secretariat will in Durban launch a “Momentum for Change” initiative on 6 December designed to demonstrate how the public and private sectors are already working together to fight climate change.