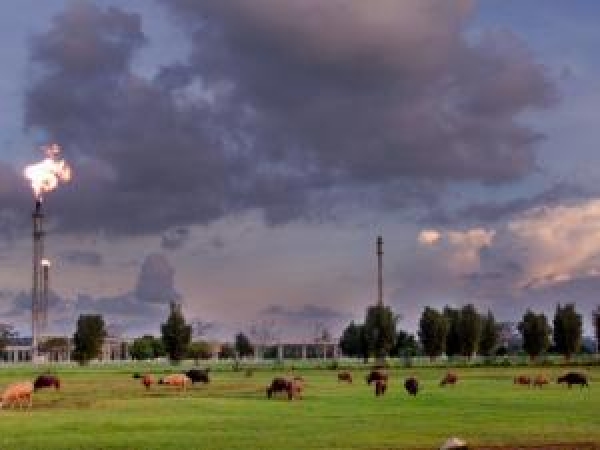 To East Africa’s assets of spectacular wildlife, abundant land and shimmering beaches you can now add gas – so much gas it could transform global energy flows along with some of the world’s poorest countries.

Finds announced just last week off Tanzania and Mozambique are estimated to hold enough gas to supply France, Germany, Britain and Italy for at least a year – possibly much more.

These and other discoveries in eastern Africa in the past year have sent shares in small explorers soaring, prompted takeover battles and rattled gas producers in other regions.

They are already starting debate about how the resource wealth can bring better living standards rather than exacerbating corruption and distoring eastern Africa’s relatively diverse economies just as they are taking off.

East Africa has been emerging as an oil-producing region in recent years, although discoveries in Uganda and most recently Kenya have so far been smaller than in West Africa’s giants. 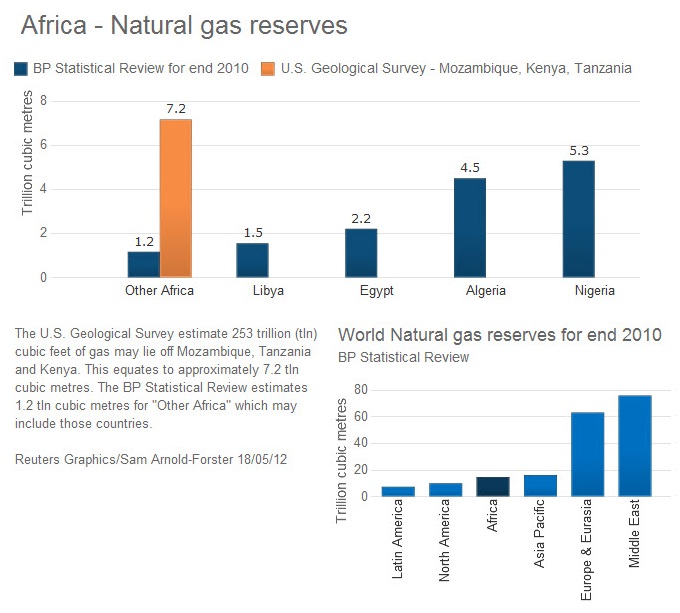 The excitement over oil has been overtaken by the largely offshore gas discoveries streching along eastern Africa’s Indian Ocean coast from Kenya to Mozambique.

“It’s a thrill a minute. The news is coming hard and fast,” said Nick Cooper, CEO of explorer Ophir Energy (OPHR.L), whose share price has more than doubled in four months.

Anadarko estimates its reserves off northern Mozambique at 50 trillion cubic feet (1.4 trillion cubic metres) – almost as much as Libya’s proven gas reserves. It is planning production from 2018.

a cleaner alternative to oil

Demand is low from eastern Africa’s small, if fast-growing, economies so the vast majority of the gas would be available for freezing into liquefied natural gas (LNG) to supply an expanding global market for a fuel that burns more cleanly than coal.

“We can help vault Mozambique into being one of the world’s three largest LNG exporters,” Anadarko Chief Executive Jim Hackett told an Eni company magazine.

According to Reuters calculations, Mozambique could be vying with Algeria as the world’s sixth largest exporter of gas by any means by the middle of next decade.

“There could be 12 trains and still gas left over for GTL,” Philip Wolfe, head of oil and gas at investment bank UBS, said. GTL, or gas-to-liquids, technology converts gas to motor fuels.

Twelve trains – the term for the facilities that turn natural gas into freezing liquid – could pump 60 million tonnes a year. Japan, the world’s biggest importer of the fuel, used about 78 million tonnes last year.

In eastern Africa’s favour are the lower costs of building the multi-billion dollar plants needed than in countries such as Australia.

Eastern Africa is seen as politically stable compared to much of the Middle East and many other parts of Africa – although the Somali pirates haunting the Indian Ocean could be a worry for large shipments of explosive fuel.

The small explorers are immediate beneficiaries of the boom.

Cove Energy (COVE.L), a shareholder in Anadarko’s block, has accepted a $2 billion bid from Royal Dutch Shell. Its share price has more than tripled in eight months.

Ophir Energy bought Dominion Petroleum this year and is the subject of frequent takeover rumours – with Indian, Thai and Chinese state oil firms all linked to bids for regional players.

At today’s prices, the 30-40 million tonnes a year of LNG which Mozambique may produce would mean revenues of around $30 billion dollars – more than three times the country’s current gross domestic product.

Some shiny buildings stand out in the shabby, bustling port capital Maputo, where Anadarko is building a new regional headquarters, and high-end tourist resorts dot the coast. But much of Mozambique is a sprawl of villages connected by rough tracks.

Cash is already flowing in. Eni said it expects to spend 3.1 billion euros in Mozambique between 2012 and 2015. Anadarko and its partners will likely spend more.

But where does the money go?

The question is how much this will really benefit the region.

Current contracts do not have the kind of clauses demanding the use of local content set by countries such as Brazil, meaning domestic firms could be relegated to bit players. Quick construction means bringing workers and equipment from abroad.

Longer term benefits may be just as uncertain.

“Africans need to have this discussion early on as to how to develop the resources for our own benefit,” Brian Dames, the head of South African state power company Eskom, told Reuters.

“Some of these must be exported but it should not be a recolonization of Africa,” said Dames, who hopes Africa’s biggest economy might ease some of its power shortages with links to generating stations using the newfound gas.

Eastern African governments can expect a big lift to revenues.

If regional states got even half the share of Qatar – seen as particularly savvy in managing its gas income – they could together expect $10 billion a year in tax. That compares to annual budgets of around $13 billion in Kenya, $8 billion in Tanzania and just $4 billion in Mozambique.

“The problem is that once a government relies on oil and gas revenues there is no incentive to develop other areas of the economy,” said Markus Weimer, Africa Programme Research Fellow at Chatham House in London.

That is the lesson from countries on the western side of the continent such as Nigeria and Angola, where strong governance does not exist and finding a way to grab a share of oil and gas money has become the main game in town.

Resource money can entrench elites and worsen corruption. That is already a problem in eastern African countries, whose strength has often been their diversity, with tourism, mining and agricultural commodities all among sources of income.

The term “Dutch Disease” was coined to describe the damaging economic impact of resource wealth following a natural gas boom in the Netherlands. Eastern Africa’s countries are far less prepared for the change gas promises to bring.