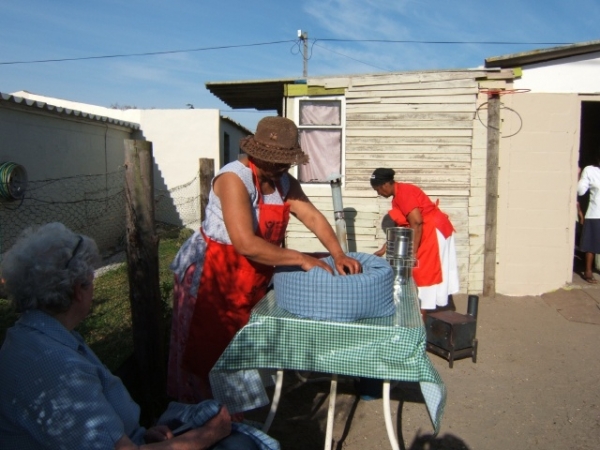 Hunger and poverty go hand in hand. Every cent saved could mean a lot to a starving child; so reduction of fuel costs could mean the difference between going to bed without food or having a meal.

Energy saving technologies abound…from old fashioned ideas such as a Haybox or Wonderbox to a myriad of designs for rocket stoves. However, this knowledge is not being passed on to people desperate for help.

A pilot project in the Overstrand, Vuka Energy Savings has demonstrated and tested the audience rating and usage of many energy saving technologies and found that once the technologies are understood and used regularly, a good savings in monthly costs of electricity, gas, paraffin or wood is reported.

These energy saving technologies also cut down on the time taken for cooking a meal – thus, the housewife does not have to stand over or watch her food cooking for more than 10 to 30 minutes, depending on the item cooked. This means that women do not need to leave unattended pots on gas/paraffin or open fires, often with children alone in the dwelling.

The Vuka Energy Savings Project which is running in Stanford and Hermanus at present, has been demonstrating the use of the following technologies, as well as other products (see Products on website) which might be of use to shack dwellers and people on low budgets

There are numerous products which could be added, but the main aim at present with the limited funds available, is to gain the attention and trust of the people whom Vuka targets and the projected plan is to follow up with on-going cooking clubs.

By the making of steam bread on an electric stove, with the use of a Wonderbox, the cost of electricity usage reduces to the time it takes to boil water in the pot used to steam the bread. Once the water has boiled, approximately 10 minutes, the covered pot of water and dough in a plastic bag are placed in a Wonderbox (heat retention box) for 1 ½ to 2 hours – no further use of electricity is required. The loaf of bread would cost in the region of R5.

Rocket Stoves, made from recycled drums/tins/metal/bricks, use sticks and twigs which can be found at a garden refuse dump. Rocket Stoves use 75% less energy to cook an amount of food compared to other fuel sources. This is because of the very efficient ‘rocket’ design and conservation of heat energy.

A suggestion has been mooted to set up Energy Saving Information Hubs/Kiosks where people in the vicinity could come to demonstrations and see the products on display and in use. The possibilities are endless and the Vuka Team now has 3 years of experience in doing demonstrations, dealing with misgivings and hearing about the successes, of which there are many. Grateful women have taken the ideas back to the Eastern Cape this year to their families there and are very enthusiastic about the knowledge which they are acquiring.

Many ordinary people are surfing the internet, finding products which can be made mainly from recycled items but these technologies need to be disseminated to people on the ground who desperately need to find a way to survive in the increasingly hostile world.