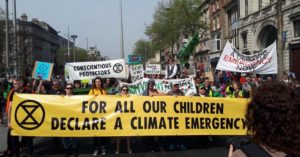 “We undertake this decisive shift in our energy trajectory at a time when humankind faces its greatest existential threat in the form of climate change.

Yesterday I met Ayakha Melithafa, a young climate activist from Eerste Rivier who attended the World Economic Forum in Davos this year to call on world leaders to stand firmly for climate justice.

Ayakha asked me to make sure no African child is left behind in the transition to a low-carbon, climate resilient and sustainable society; and it is a promise I intend to keep.”

XR South Africa would have preferred him to call it a climate crisis. More than that, they want him to declare a climate and ecological emergency because that would at least signify that the gravity of the situation is truly and deeply realised by the South African government.

The State of the Nation Address is to some extent, a PR exercise. But it is also, or should be, a statement of intent. And, as such, it holds glimmers of hope, along with disappointments and disturbing omissions.

The strong language used to recognize the climate threat is heartening. At least these words can be tabled by constituents who are applying pressure, and responsibility and knowledge of the crisis becomes harder to avoid.

The promise to promulgate the Climate Change Act is welcomed. This very broad piece of legislation will enable, empower and compel all levels and agencies of government to take responsibility in a solid framework of mitigation and adaptation measures. It also places pressure on emitters to reduce pollution.

Drought is identified as an issue and drought mitigation strategies are tabled and committed to, including “planting and storing fodder, removing of invasive plants and management strategies to prevent soil degradation.”

The need to expand the share of renewable energy sources is highlighted and supported, both through supplementary power purchase agreements from renewables, and well as continuing with the REIPP programme. The more renewables there are feeding the country’s energy needs, the less fossil fuels are being used.

The almost unique richness of plant and animal diversity is recognised and highlighted as valuable.

The railway network is being repaired and upgraded. This is a less carbon intensive way of moving people and goods than most others

Consensus based social compacts between state, business, labour and society are being supported and recognised as critical to survival and success. We are all in this together. Energy supply is being looked at through this lens.

The recognition that the current economic system overwhelmingly continues to lead us to more unemployment, more of an ailing social and business environment and overall financial decline is not framed as a good thing, but is good to table as a reality.

The referenced Climate Change Bill, as per the iteration published for comment in June 2018, envisages several years before adaption and mitigation measures come into full force and effect. Unless timelines are shortened, it is not going to be the essential tool it needs to be. The process of getting this law in place is also dragging on far too slowly.

There is no mention of the all important Just Transition that must accompany carbon reduction measures, ensuring that social and economic justice accompany climate justice.

Water use licenses have been promised to be granted a lot more quickly. But given the recklessness or neglect with which they are sometimes granted, we remain mistrustful that our precious water resources are being adequately protected by the state.

The languaging used to reference “industrial opportunities in the green economy” suggest business-as-usual, but in a green way. The benefit of the doubt needs to be given here, but we will need to see visionary policies relating to a truly non-ecocidal economy before our concerns are alleviated.

It is not new bad news, but references to IRP 2019 reiterate that new coal-fired power generation is very much still on the cards.

Drought mitigation strategies include “developing drought resistant seed.” This may be positive or may signal an increased focus on bio-tech and GM technology to supposedly combat drought, often a risky approach.

Overall, the intensifying and multi-faceted water crisis in South Africa is not mentioned in the stark terms it deserves. Food sovereignty and security as issues is also not sufficiently acknowledged.

Conservative scientific consensus tells us that we have to halve our GHG emissions by 2030 to have a shot at remaining within a 1,5 degree C temperature increase (above pre-industrial levels. According the UNEP’s latest emission gap report, that is a reduction of around 8% per year starting now. Nothing in this SONA reflects this urgency, and hence XR South Africa’s demand that government tell the truth.

Even more fundamentally, the ills of unemployment, inequality, economic decay and social crumbling are being addressed through a business-as-usual approach, only it has to be better, more competitive, more efficiently extractive. The very things that are killing us. There appears to be no solid vision or understanding of the depths of system change that is required, and as a start XR South Africa demands the declaration of a climate and ecological emergency.