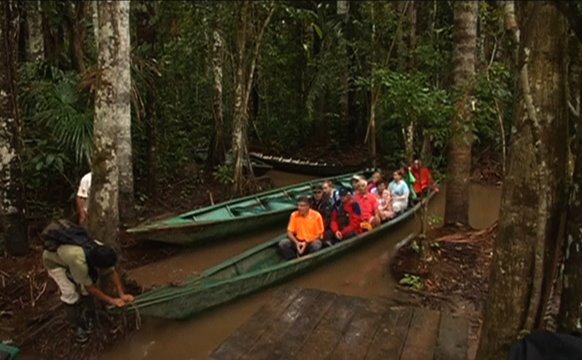 This year’s U.N. Climate Change Conference in Peru marks the first time the talks have been held in an Amazon country.

More than 70 percent of Peru’s national territory is within the Amazon Basin. The founder and executive director of Amazon Watch, Atossa Soltani, talks about the significance of the U.N. climate summit taking place in Peru amidst long-term threats to the Amazon.

Soltani also addresses the challenges facing developing countries with lucrative, but carbon-intensive energy resources, and whether the United States is being a responsible environmental steward for future generations.

ATOSSA SOLTANI: I think this COP 20 is important because it’s the first COP ever in an Amazon country. And the Amazon is incredibly important in the climate debate, both because deforestation is a huge source of emissions, but also because the rainforests of the Amazon actually are the rain machine for the planet. They create these flying rivers that basically provide fertile rain to the entire continent and the rest of the world. It’s like the heart of the planet, pumping moisture and vapor. So, when we lose the Amazon, we not only create emissions, but we lose the climate-stabilizing function of the forest.

And we’re reaching a tipping point. We’re actually very close to the tipping point where the hydrological cycle could collapse. In fact, we had a drought in 2010 in the Amazon that generated more emissions, carbon, than all of the annual emissions of the country of India. So, we are in a critical moment where the future of the planet will depend on what happens in the Amazon. And we need to challenge our governments, that are actually using the Amazon to generate both huge amounts of electricity from dams, which block the flow of the river and flood forest and cut off the hydrological cycle, and also looking for oil and gas and fossil fuels that we can’t even afford to burn. So this is an important moment to really put the importance of the Amazon on the top of the agenda.

And then you say, “Well, what do we have to do to protect the Amazon?” Well, we have to support indigenous land rights. Indigenous people’s land titles could be about 200 million hectares of the Amazon rainforest. Supporting their life ways, supporting the way that they can live off the land and protect their forests, as the way that they have for thousands of years, is key to our future survival.

On the other hand, we have to really cut subsidies and stop exploration altogether of oil, gas, carbon, coal in the Amazon region—actually, everywhere. We have to basically stop expanding the search for more fossil fuels and start to talk about which reserves get kept underground. And that’s an important conversation to be having here. President Obama even acknowledged that we have to keep the majority of the world’s fossil fuels in the ground. Here, if you go to the Amazon, 70 percent of the Peruvian Amazon is being leased out to oil companies that are looking for more reserves our planet can’t afford to burn.

70% of Peruvian Amazon leased out to oil companies!

So, that’s why this COP is important—to put the Amazon on the map, to put indigenous rights central to the debate, and to call for the end of the fossil fuel era. That’s why we’re here.

AMY GOODMAN: What do you say to someone like, well, the popular president of Bolivia, Evo Morales, who, when he just ran once again for president and won by an overwhelming majority, he was campaigning on health clinics, on economic development, and a lot of this is fueled by extraction, is funded by extraction; presidents who would say, “These other countries, like the United States, this is how they developed—who are you to stop us from doing the same?”

What we do to rivers and forests we do to ourselves

ATOSSA SOLTANI: Well, what we’re doing to the planet, to the forests and to the rivers, we’re doing to ourselves. We’re only a few generations away from losing the hydrological cycle. What I would say to the president of Bolivia is that, remember that 70 percent of the gross domestic product of South America comes from places that are fed by Amazon rain. Seventy percent of the GDP here depends on Amazon rain. It’s really cutting your nose to spite your face when you can say, “Well, we’re going to have to destroy the forest that gives us rain in order to have jobs.” That makes no sense. We need to move to a post-petroleum economy. The sooner we do it, the more chances we have of recovering the productive systems that give us life.

AMY GOODMAN: And what do you say to someone like President Correa, who said, “I want to preserve the Yasuní National Park. I don’t want to take the oil from the soil. Please,” to the industrialized world, “help us protect this space”? And he couldn’t raise the money, so he’s moved in, you know, with Chinese companies and has infuriated the indigenous population there.

Leaders to stand firm and keep the oil in the ground

ATOSSA SOLTANI: Yes, I stood with President Correa on stage when he launched this initiative. I wholeheartedly support this initiative to keep the oil in the ground. It was ahead of its time. I would say to President Correa, “Great idea. It was ahead of its time. The world maybe was not ready to pay for this. But they will be. They are now.” We are now all talking about how to basically keep oil and gas in the ground. And President Correa is losing his leadership role, and that being the first country to have proposed this, he could really have the moral and ethical leadership. Leadership in this moment is key, and he had a great leadership position. It’s an idea that will happen. Whether Ecuador leads it or not remains to be seen.

We will continue to stop—fight for saving Yasuní National Park. His arguments of why Yasuní should be protected in 2007 are still true today. And really, we want—it really is up to the international community and to China, who has given Ecuador $13 billion in financing in exchange for the oil that Ecuador has remaining in its Amazon, including Yasuní oil. So it’s also up to China to say, “Hey, maybe China should forgive Ecuador’s debt.” And President Correa should assume leadership role and keep the oil in the ground and protect this area, which is not only the most biodiverse place on Earth, it was actually here around the ice age, and it’s expected to survive climate change. It really is the cradle of life.

AMY GOODMAN: And what do you say—what question would you have for Todd Stern, the chief U.S. climate negotiator here?

ATOSSA SOLTANI: I would say, “What is the U.S. doing to basically end all subsidies—all subsidies—for exploration?” You know, our government spent $26 billion subsidizing new reserves, or looking for new reserves. That has to stop. We have to basically tax carbon. We need to tax carbon and stop talking about climate mitigation of, you know, one pollution credit versus another, allowing someplace to pollute versus saving carbon elsewhere. We have to get beyond that and look at carbon tax. We have to look at cutting—not only cutting exploration, changing the laws that now allow fracking to proliferate throughout America, and looking at basically ending subsidies for fossil fuels.

AMY GOODMAN: And to President Obama, in what some might call the lame-duck years, others might say these are his years to create his legacy?

AMY GOODMAN: That was Atossa Soltani. She’s the founder and executive director of Amazon Watch. She had just come out of a remarkable afternoon with indigenous women yesterday, meeting to discuss their own solutions to climate change.