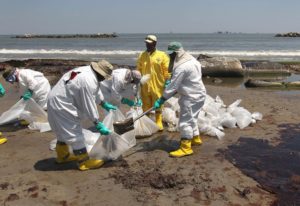 A clean-up crew shovels oil from a beach in Louisiana after the disastrous Deepwater Horizon oil spill in the Gulf of Mexico in 2010. Image: John Moore / Getty

Oceans Not Oil has started a petition calling on Minister for the Environment Barbara Creecy, to withdraw her approval of Italian oil corporation ENI and Sasol’s application (ER236), for exploratory drilling offshore of Richards Bay and Scottburgh.

These companies, with poor safety reputations, were given the go ahead to drill at record depths in the Agulhas Current, known to be one of the strongest in the world. The KwaZulu-Natal oil wells are planned to be between 3,8 – 4,1 km deep offshore Richards Bay and 5,1 km offshore Scottburgh.

The ocean is the reason we are alive

The Minister for the Environment has completely side-stepped the critique that there has been no Strategic Environmental Assessment (SEA) for the offshore oil and gas sector in South Africa – broadly recognized as an important tool to promote sustainability-driven decision making. She has failed to explore energy alternatives and excluded the environmental and socioeconomic consequences of this exploration to our climate future.

Oceans Not Oil: save SA’s coastline and future!

The Minister for the environment’s approval does nothing to protect the already heavily compromised sea, upon which we all rely, nor break down the massive political barriers to decarbonising electricity generation in South Africa.

As South Africans we demand a reduction of emissions by half by 2030. It is imperative that Minister Creecy withdraws her approval of ER236 before it’s too late.