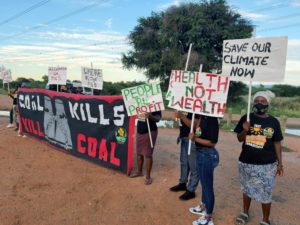 This morning, in a peaceful demonstration – that started at the crack of dawn at the Medupi, Matimba and Exxaro crossing – Earthlife Africa Johannesburg joined local community activists in Lephalale in Limpopo Province, to demand that the World Bank forfeits its loan to Eskom’s Medupi coal-fired power station for failing to install pollution-abatement technologies to help ease the devastating pollution in this region.

According to Earthlife Africa’s Thabo Sibeko, the World Bank should hold Eskom accountable according to its loan agreement.

Says Sibeko, “In 2010, Eskom committed to install flue-gas desulfurisation (FGD) technolgies – which removes sulphur dioxide (SO2) from exhaust flue gases of fossil fuels – to reduce SO2 emissions in the air. By not compelling Eskom’s compliance, the World Bank is complicit in the deteriorating quality of life, resulting in more premature deaths and health problems of hundreds of people in the Limpopo region. We need the World Bank to demonstrate its support to accelerate a just transition to low carbon development, rather than allowing Eskom to continue perpetrating climate injustice.”

“These communities want to shine a spotlight on their daily struggles, as a result of ongoing, unchecked air pollution from the Matimba and Medupi coal-fired power stations. Thankfully, in a major win for human rights, the proposed news Thabametsi coal-fired power station has been mooted. This has saved our people from even more damage from pollution and more risks in this water-scarce region,” says Sibeko. 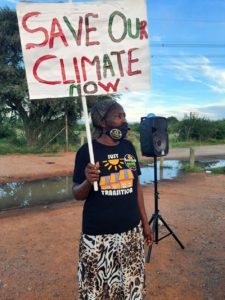 Earthlife’s Elana Greyling, a local activist who has been working with women in the Lephalale region for many years, says that air pollution and water scarcity are huge issues for the communities in these areas, and has a major effect on women.

Says Greyling, “Today, we are protesting Eskom’s broken promises, from 2010, to the people of Lephalale. Not only has Eskom backtracked on its commitment to install the required pollution-abatement technology, but the failed state-owned utility has publicly stated that it seeks to continue polluting the air – in other words, to break the law regarding minimum emissions standards (MES) – for another ten years. This means that we would have to deal with the impacts of full pollution from these power stations for at least twenty years. This is unacceptable!” 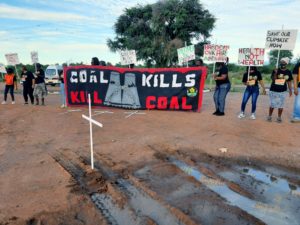 “In Lephalale, we are expected to deal with the triple burden of having to live with the adverse effects of the pollution caused by Medupi and Matimba, while still expected to pay the same exorbitant electricity tariffs and still be subject to load shedding, as the rest of the country. On top of all this, is it not absurd that many households here in Lephalale, the home of the coal-fired power station, do NOT have electricity?”

The protesters, activists from various communities, also aim to highlight the major risks to endangered wildlife, threatened as a result of Exxaro’s application to add more open pits to its Grootegeluk mine. “We are not prepared to pay the price for decisions taken by Eskom or Exxaro, any longer. We need our quality of life to improve, but it is not possible with the air pollution and damage from the mining. Exxaro must take responsibility for the fact that it is the coal they produce, that is burnt by Eskom and polluting our air and harming us. We cannot live like this anymore,” says one activist.