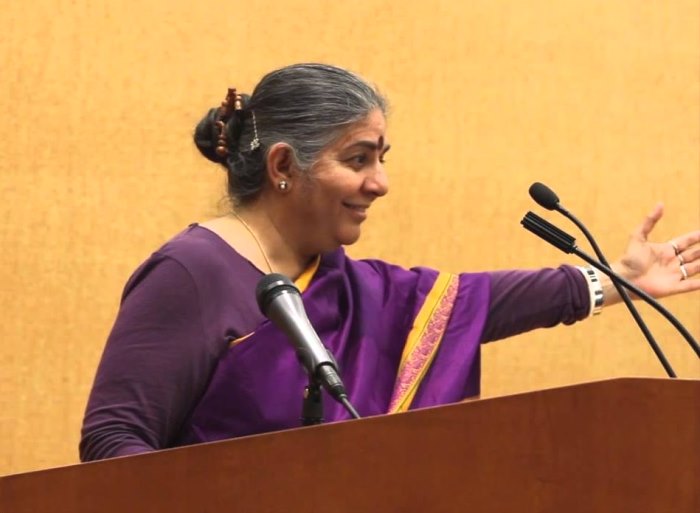 Vandana Shiva is an Indian scholar, environmental activist and anti-globalization author. Shiva, currently based in Delhi, has authored more than 20 books.

The tragedy of 13th November 2015 in Paris calls on all of humanity to respond to the escalating and vicious cycles of violence by creating virtuous circles of peace.

The recent horrific attacks in Paris, Beirut and Egypt’s Sinai peninsular make it all the more imperative that we came together in solidarity for the future of humanity and Mother Earth.

Governments under corporate influence may fail at the Climate Summit in Paris – but we as citizens cannot.

The forgetting and erasure of the root causes of the Syrian crisis – in the degradation and desertification of land because of the imposition of non sustainable Industrial agriculture in the fragile ecosystem of what was the fertile crescent, where agriculture started 12,000 years ago – will prevent us from finding real and lasting solutions. The uprooting of peoples and creation of refugees, and destabilisation of societies is intimately linked to the processes that are destabilising the climate system.

Half of the Climate Crisis has been caused by the industrial food system. With organic farming, we make peace with the earth, by addressing climate change, and peace among people by stopping the large scale uprooting of humanity from their homelands.

Life is at stake, Earth’s life as well as ours.

A People’s Pact to Protect the Planet and Each Other

Let us, as citizens of this beautiful and bountiful planet, make a people’s pact to protect the Planet and each other, a Pact for the Earth to care for her as one humanity and as part of one Earth Community, to sow the seeds of change for a new Earth Democracy, based on justice, dignity, sustainability and peace.

Humanity stands at the edge of an abyss. We have destroyed the planet, its biodiversity, water and the climate, and through this destruction, the ecological context for our survival as a species.

Ecological destruction and resource grab are generating conflicts, which are being accelerated into full blown wars and violence.

A context of fear and hate is overtaking the human imagination. We need to sow the seeds of peace – peace with the earth and each other, and in so doing, create hope for our future – as one humanity and as part of one Earth community.

This pact was first initiated  on 9 November 2015 at the launch of a Citizens’ Garden in the Jardin Marcotte in Paris, together with Navdanya, Solidarité, AMAP Ile de France Network, the Cultures en Herbes, and the Mayor of Paris 11.

We invite you to become part of the ‘change we want to see’ a change that allows us to reclaim our future as one humanity, one Earth community, through Earth Democracy.