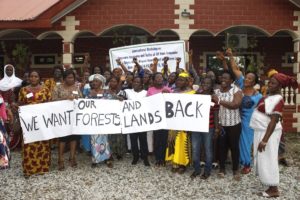 This year, a group of organisations from African countries, together with the World Rainforest Movement, has issued an open letter about investments in monoculture tree plantations in the global South, particularly in Africa.

The letter is a response and critique of a June 2019 report titled, “Towards Large-Scale Commercial Investment in African Forestry”. The report was prepared by an outfit called Acacia Sustainable Business Advisors, which was set up by Martin Poulsen, a development banker. One of his co-authors for the study was Mads Asprem, the ex-CEO of Green Resources, a Norwegian industrial tree plantation and carbon offsets company. Green Resources’ land grabs in Mozambique, Tanzania, and Uganda have resulted in loss of land, evictions, loss of livelihoods and increased hunger for local communities.

The study was produced for the African Development Bank and WWF Kenya, with funding from the World Bank’s Climate Investment Funds.

The Open Letter (signed by 117 organisations and people) is posted here in full:

Open Letter about investments in monoculture tree plantations in the global South, especially in Africa, and in solidarity with communities resisting the occupation of their territories.

September 21st is the International Day of Struggle against Monoculture Tree Plantations. Unlike others, this Day was not created by the United Nations (UN) or by governments. The Day was created in 2004 by rural communities, gathered in the Brazilian hinterland, to denounce and shed light on the impacts of monoculture tree plantations on their territories, and affirm their determination to resist such plantations and take back their territories from the hands of corporations.

16 years later, the Day remains as relevant as ever: there is a real danger of a gigantic, worldwide expansion of monoculture tree plantation. This is promoted as a solution to prevent climate chaos and to the industrialized world’s dependence on oil, gas and coal. A group of governments, corporations, consultants, investors and major conservationist NGOs have come together to put their mega-plans[1] for tree plantation expansions on the table.

Although highly questioned, a forest as defined by the FAO (UN Food and Agriculture Organization) and several national governments mistakenly includes monoculture tree plantations. In their eyes, plantations are “planted forests”. This definition favours only the plantation corporations, thus guaranteeing their main objective: generating profits.

Africa is the continent with “the most profitable afforestation potential worldwide”, according to a report produced in 2019 by consultants for the African Development Bank (AfDB) and the conservationist NGO WWF-Kenya. “The study has identified around 500,000 ha of viable plantation land in ten countries: Angola, Republic of Congo, Ghana, Mozambique, Malawi, South Sudan, Tanzania, Uganda, Zambia and Zimbabwe.” The study proposes the speedy creation of a Fund, headquartered in a tax haven (Mauritius), to finance the planting of the first 100,000 hectares of trees.

In order for these plantations to generate profits for private investors, the study claims that aid will be necessary from European public international cooperation agencies, i.e., taxpayers’ money from Northern European countries, namely, Finland, Sweden, Norway, Denmark, Iceland, the United Kingdom and The Netherlands, as well as from the World Bank via the International Finance Corporation (IFC), which makes loans to private companies.

The study and its recommendations leave us perplexed and indignant, given the false assumptions and inconsistencies on which it is based (see Annex I for a more detailed description). Below, we present a summary of our main criticism.

The study repeats the same treacherous and false promises that corporations and their advocates always make. It states that plantations improve communities’ living conditions, create jobs, improve the soil and the quality and quantity of water. The corporations’ ‘social’ projects would be attractive to the communities. However, plantations lead to a large number of violations of rights, create very few poorly-paid and dangerous jobs, destroy forests and savannas, degrade soils, contaminate and dry up water sources and destroy communities’ way of life. With the plantations, guards arrive who will restrict communities’ freedom of movement; cases of abuse, sexual violence against women and HIV/AIDS infections increase in number. The promise of ‘social’ projects, often not fulfilled, is the main bargaining chip for corporations to gain access to communities’ lands.

The study refers to land conflicts only as “challenges” and the proposed solution is to “follow FSC and other best practises”. Firstly, the 500,000 hectares that the study suggests corporations should plant as monoculture tree plantations are not abandoned or degraded lands. Corporations always want fertile lands, usually flat and with availability of water – in other words, lands that tend to be used by communities. By recommending the FSC, the study ignores ample documentation that proves that the FSC does not solve plantations’ structural problems, and land conflicts even less. The FSC deceives consumers by considering the model of large-scale monoculture plantations “sustainable”, for it always leads to large tracts of land being controlled by corporations and to the intensive use of agro-chemicals and synthetic fertilizers. So far, compensation for the populations that have lost their lands and means of subsistence has always been derisory or inexistent. Meanwhile, the social, environmental, economic and cultural damage caused by monoculture tree plantations in rural areas of African countries has never been compensated by corporations. There exists no way to calculate the damage and much of the harm done is irreparable.

The study references a World Bank/IFC project in Mozambique, stressing that “one important element of the IFC approach will be to define and register land rights”. In fact, the World Bank, as well as financing plantations, has a policy of encouraging governments in countries of the South to speed up the granting of individual deeds and, therefore, the privatization of land, in an attempt to prevent its collective recognition as community land. The World Bank has been promoting the handing over of community lands to private capital all over the world. It is important to highlight the fact that in recent years, the government of Mozambique has put in place a number of reforms in the forestry sector. These include a review of the Forestry Policy and its Implementation Strategy and, very recently, a public consultation process with a view to also reviewing the National Land Policy. In all of these processes the World Bank is the common denominator in terms of promotion and financial “support”. This review is taking place under the pretext of improving transparency and efficacy in land management and policies, and will inevitably force an alteration of the Land Law and respective Regulation, thus legitimizing the occupation of community lands which provide living conditions for communities and peoples.

The study states that “Global oil and industrial companies” want to “become part of the solution rather than a major part of the problem. They are beginning to see the potential of forestry investments.” Oil and gas companies are an integral part of the climate crisis, regardless of such proclamations. They have not shown any interest in solving it; on the contrary, they intend to invest first and foremost in false solutions – after all, profits are above all else.

Other false statements include: “the world will need the type of intensive afforestation (…) that the Brazilian forestry industry is implementing”; and that Brazil’s neighbour, Uruguay, is “the world’s most recently developed forestry country”. The truth is that the Brazilian experience with industrial tree plantations over the course of the last few decades has led to numerous land conflicts and environmental degradation. Municipalities with the highest concentrations of plantations are among the poorest, compared with those with diversified agriculture based on smallholders. In Uruguay, the same negative impacts occur. Rural areas have seen a massive exodus of people, with the rural population reduced by half. Furthermore, citizens of Uruguay have taken on an enormous debt, owing to a recent contract between its government and Finnish multinational UPM. According to this contract, the government agreed to carry out multi-million dollar infrastructure works to service UPM and the export plans of its second pulp factory.

The study also states that “The main barrier to successful investments in African greenfield planting is low historic returns. New planting by private companies has ground to a halt in recent years.” This not only reveals that profits are what really matters to private investors, but also that the authors of the study deliberately ignore the main reason why the expansion of industrial plantations has been impeded in various African countries: the resistance of communities against such monoculture plantations.

The study also seeks to attract investors, suggesting “the possibility of planting [trees] at significantly lower costs (…), more or less half of 10 years ago (…)”. Promising companies that they will have to spend less means that the weight of the industrial plantation projects from the proposed fund will fall even more upon already indebted African countries and, consequently, on their populations, particularly rural communities that run the risk of losing their most fertile lands.

It is important to stress that a “conservationist” NGO is a co-producer of this study that promotes investments that will benefit first and foremost private companies. The study itself reveals how NGOs like WWF should no longer be considered NGOs since they function and act as the ‘right hand of the plantation industry’.

The report refers to a non-public version of the study which has not been disclosed to the public as far as we are aware. The report also notes that “(…) there is a clear coalition of DFIs [development finance institutions] interested in further discussion on this topic [creation of the Fund], including: CDC [United Kingdom], Finnfund [Finland], IFC [World Bank], NDF [Nordic countries: Finland, Norway, Sweden, Denmark, Iceland] and FMO [The Netherlands]”. This demonstrates that decisions about investments are being made without the participation of the communities and other civil society organizations and social movements from the regions in question, i.e., the parties most affected. How can it still be acceptable in the 21st century that public international cooperation agencies use money from their taxpayers in this way? Hiding their decisions from their own citizens and from the populations that will be affected? When plantation corporations and their investors, after everything has been decided, state that they are applying the principle of communities’ “free, prior and informed consent”, does this merit any credibility?

We demand that the non-public version of this study be published immediately by the AfdB and WWF-Kenya, so that its content may be known to the communities and organized civil society in the countries where they intend to implement their plans.

We reiterate our indignation with regard to the channelling of public resources towards private investments, through tax havens, to be invested in highly damaging activities, such as large-scale monoculture plantations.

We further demand a wide-ranging review of the process of allocation of land to plantation corporations, ensuring the return of land to the communities that depend on this land, today and in the future. In Mozambique, for example, peasant agriculture constitutes the main guarantee of subsistence for more than 80% of the population, and the land is the only thing to which communities can resort to ensure food safety and sovereignty.

We reiterate our solidarity on this September 21st with the legitimate and just struggles of communities around the world that resist the advance of plantations and strive to take back their lost lands. They must be remembered and made visible every day. And they will certainly resist this new and insane expansion plan proposed in the AfDB and WWF-Kenya study and commented on in this Open Letter.

We appeal to the solidarity and unity, so that together we may demand the immediate abandonment of any and every afforestation programme based on large-scale monoculture plantation.

The Struggle Continues!
Plantations Are Not Forests!