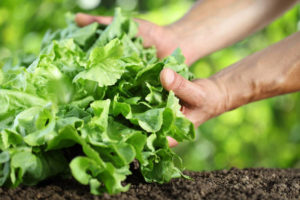 In early June, Organic Zone owner Allister McGregor asked Topic SA to look into one of their suppliers. Naturally Organic had found some blue material on their organic lettuce that did not appear to be of organic origin. In response, Organic Zone investigated and then pulled all the produce from that supplier from its shelves.

The retailer sent the blue material found on the lettuce to a laboratory for analysis. It was identified as a snail poison product with the active ingredient metaldehyde.

Organic Zone then conducted further testing on Naturally Organic’s produce such as organic beetroot, carrots and coriander. The second issue that emerged was trace amounts (less than 0.02 mg/kg) of Didecyldimethylammonium Chloride (DDAC) were found on the organic coriander. No pesticides or chemical compounds were found on the other produce.

DDAC has bactericidal, virucidal and fungicidal properties and is used as an antiseptic for wood, disinfectant for cleaning and as a fungicide for crops. Note that the amount found was extremely low, below the limit of quantification.

What does organic mean?

The International Federation of Organic Agriculture Movements states that “organic agriculture is a production system that sustains the health of soils, ecosystems, and people. It relies on ecological processes, biodiversity and cycles adapted to local conditions, rather than the use of inputs with adverse effects.”

The latest SAOSO Standard For Organic Production And Processing dated June 2020 details the approved substances for use in organic production and processing, including pest and disease control.

There is currently no legislation governing the production of organic food in South Africa. According to labelling expert, Glyn Fogell, neither the Department of Health nor the Department of Agriculture, Land Reform and Rural Development (DALRRD) have moved forward with the regulations despite working on them for a while.

Fogell says: “The DALRRD position is that you may describe a foodstuff as “organic” if it, or its components, were produced in conformity with an internationally recognised standard.”

Rosenberg noted the lack of policy and regulations and commented that through SAOSO he has been working with government for decades in an attempt to legally define the term ‘organic’ and what it means.

He said: “This legislation gap highlights the importance of consumer organisations like TOPIC to help safeguard the industry and protect the consumer.”

The local organic produce industry can make use of international regulations governed by IFOAM and local regulations governed by SAOSO. Farmers can then certify through international bodies such as CERES, SGS, Ecocert and Control Union or they can certify through a locally focused quality assurance system called Participatory Guarantee Systems or PGS.

All these bodies inspect the farms to ensure conformity to relevant regulations and the supplier’s packaging then carries either an official organic certification number or a PGS label for the consumer to have confidence that checks and balances are in place. A unique feature of PGS is that it encourages both retailers and consumers to participate in the process by attending farm visits, meeting the farmer and his peers, and seeing the farm and its practices first-hand.

Naturally Organic is based in Philippi in Cape Town’s “bread basket”, the Philippi Horticultural Area (PHA). The farm is owned and operated by Skye Fehlmann and has been running since 2004. Naturally Organic claims the produce grown on the farm is organic and also resells organic produce from other farms.

TOPIC emailed Fehlmann asking what organic standards he was following, his certification status, and his current internal testing/auditing procedures. Fehlmann responded that same day and has continued to be very responsive to our questions.
Naturally Organic’s certification

Naturally Organic is currently not certified organic and was last certified by CERES for the period March 2017 to March 2018. Fehlmann said the following:

“I have previously been certified with 3 different bodies. First was BDOCA (which after the founder passed away the company fell away) and then with Control Union and then CERES. The reason I stopped certifying was there was always this issue with seed.

“Seed in organic farming is not allowed to be treated which is an issue as all seed coming into the country is treated and the ones which are not treated are generally of lesser quality of fruit. I almost lost my business as I had such bad harvests with the untreated seed I could find. So with this I stopped certifying and also felt the extra costs and stresses of certifying did not weigh in with my size and how little I actually produce.”

As mentioned, the blue material found on the lettuce was identified as a snail poison product. The active ingredient in this product is metaldehyde which is a neurotoxicant and is toxic to pets, birds, domestic animals, wildlife and humans with a small ingestion being potentially life threatening. This chemical has also been found to show up in drinking water after being used on farms.

Fehlmann denied using snail poison on his farm as he says he has a working snail system that entails keeping everything weed free so that snails don’t have a breeding ground plus “two ladies who spend two days a week picking snails off poles, sprayers and plants.” He believes the snail poison contamination came from buckets being used on the farm that have been shared with a neighbour who farms conventionally. He said the following:

“Issue here is bad management from my side. I have lots of guys just doing things I ask and me not always checking the condition of things, ie. cleanliness of buckets received. I have to admit I’m poor here and my buckets get mixed around a lot from using it to drain from a tractor or mixing my spray products and when people need something they just grab. I’m embarrassed by this as it should have been sorted out long ago.”

According to the SAOSO standards, all relevant measures must be taken to ensure that organic soil and products are protected from contamination by substances prohibited in organic farming. The onus is on the farmer to “monitor crops, soil, water, and inputs for risks of contamination by prohibited substances and environmental contaminants”. The standards also state that the “direct use or application of a prohibited method or material renders that product no longer organic.”