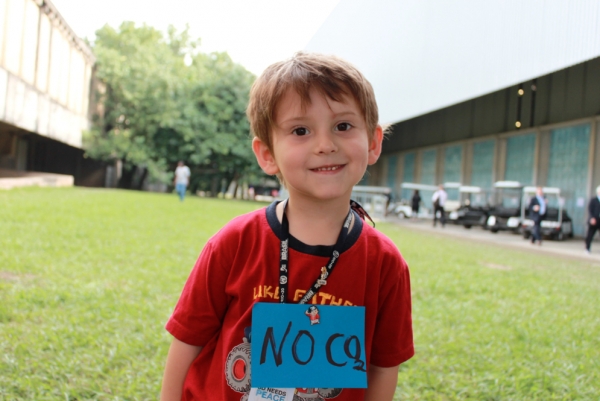 The world’s fixation on economic growth ignores a rapid and largely irreversible depletion of natural resources, which will seriously harm future generations.

This is according to a report, which on 17 June in Rio, unveiled a new indicator aimed at encouraging sustainability – the Inclusive Wealth Index (IWI).

True state of the nation’s wealth

The IWI, which looks beyond the traditional economic and development yardsticks of Gross Domestic Product (GDP) and the Human Development Index (HDI) to include a full range of assets such as manufactured, human and natural capital, shows governments the true state of their nation’s wealth and the sustainability of its growth.

The report looked at changes in inclusive wealth in 20 countries, which together account for almost three quarters of global GDP, from 1990 to 2008.

Despite registering GDP growth, China, the United States, South Africa and Brazil were shown to have significantly depleted their natural capital base, the sum of a set of renewable and non-renewable resources such as fossil fuels, forests and fisheries.

Over the period assessed, natural resources per-capita declined by 33 per cent in South Africa, 25 per cent in Brazil, 20 per cent in the United States, and 17 per cent in China. Of all the 20 nations surveyed, only Japan did not see a fall in natural capital, due to an increase in forest cover.

If measured by GDP, the most common indicator for economic production, the economies in China, the United States, Brazil and South Africa grew by 422 per cent, 37 per cent, 31 per cent and 24 per cent respectively between 1990 and 2008.

However, when their performance is assessed by the IWI the Chinese and Brazilian economies only increased by 45 per cent and 18 per cent. The United States’ grew by just 13 per cent, while South Africa’s actually decreased by 1 per cent.

The report focuses on the sustainability of current resources bases, and does not analyze the rest of the 19th and 20th centuries, when many developed countries following an accelerated growth path may have depleted natural capital.

A measure of prosperity

Wealth accounting, the concept behind the IWI, draws up a balance sheet for nations and shows countries where their wealth lies. By taking into account a wide array of capital assets a nation has at its disposal to secure society’s well-being, it presents a more comprehensive picture and informs policy makers on the importance of maintaining their nation’s capital base for future generations.

“The IWR stands for a crucial first step in changing the global economic paradigm by forcing us to reassess our needs and goals as a society.” said Professor Anantha Duraiappah, Report Director of the IWR and Executive Director at UNU-IHDP.

“It offers a rigorous framework for dialogue with multiple constituencies representing the environmental, social and economic fields.” 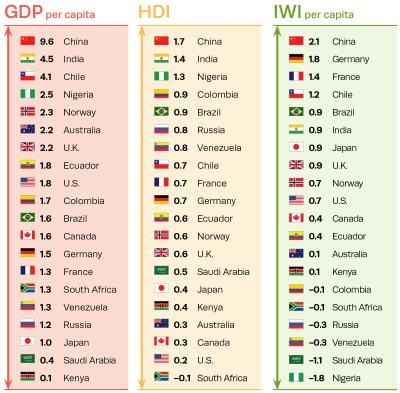 Average annual performance of 20 countries when assessed with IWI per capita, GDP per capita and HDI over a period of 19 years (1990-2008). Image: UNU-IHDP

The importance of keeping an eye on the full range of a country’s capital assets becomes particularly evident when population growth is factored in.

When population change is included to look at the IWI on a per-capita basis, almost all countries analyzed experienced significantly lower growth. This negative trend is likely to continue for countries that currently show high population growth, like India, Nigeria and Saudi Arabia, if no measures are taken to increase the capital base or slow down population growth.

The countries selected represent 56% of world population and 72% of world GDP, including high, middle and low-income economies on all continents. A few countries were chosen based on the hypothesis that natural capital is particularly important to their productive base – as in the case of oil in Ecuador, Nigeria, Norway, Saudi Arabia and Venezuela; minerals in countries such as Chile; and forests in Brazil.

South Africa is on an unsustainable track

Key findings from the report:

While inclusive wealth has increased for most countries, the report shows that an examination of natural capital is crucial for policy makers.

A new definition of wealth

Even though a reduction in natural capital can be offset by the accumulation of manufactured and human capital, which are reproducible, many natural resources such as oil and minerals cannot be replaced. As a result, a more inclusive definition of wealth that will secure a legacy for future generations is urgently needed in the discussion of sustainable economic and social development.

The report, which will be produced every two years, makes the following specific recommendations:

UN Under-Secretary General and Rector of the United Nations University, Prof. Konrad Osterwalder, concluded,”the Millennium Development Goald (MDGs) have functioned as an important tool to focus international attention and action around key pressing global issues. As 2015 fast approaches, the deadline for meeting the MDGs, it is clear that the opportunities for many developing countries to achieve their goals may be compromised if the present rates of decline of various crucial ecosystem services continue.

In order to reverse this decline, we need a natural capital accounting framework that takes into consideration the value of ecosystem services in relation to the wealth of nations. The notion being that if we are better able to take account for our natural capital, we are more likely to protect it.

With the Inclusive Wealth Report 2012 we have a new measure of economic progress that includes natural capital. Ideally, from now on, it will be essential that national and international agencies make use of inclusive wealth per capita as a yardstick to measure economic progress.

I commend all those who have been involved with the preparation of this groundbreaking report which could play an important role in promoting the shift to a green economy.”