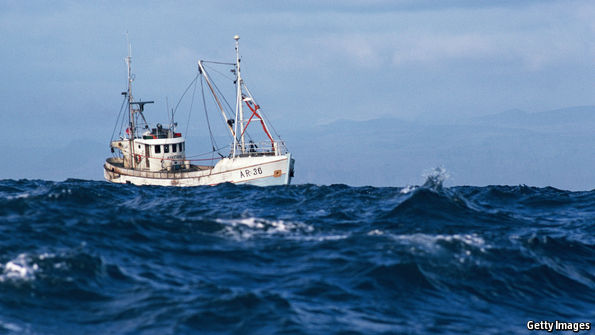 The high seas are a lawless place. That is no metaphor. Beyond the jurisdiction of governments, beyond even the United Nations Convention on the Law of the Sea (UNCLOS), which was agreed in 1982 and came into force in 1994, they have been subjected to few laws over the centuries besides the prohibition of piracy and slave-trading, and the regulation of submarine cables and pipelines.

In 2001, though, they became a little less lawless. That was the year the United Nations’ Fish Stocks Agreement (UNFSA) came into effect. The UNFSA tried to impose some order on high-seas fishing, an activity not previously considered to matter enough for people to care about it.

Now the high seas are also being pillaged

Though the fuel needed to get to the high seas is pricey, taxpayers often pick up part of the tab in the form of government subsidies. Such subsidies, combined with overexploitation of fisheries closer to land, have made the high seas attractive to fishermen. The consequence, according to the UN’s Food and Agriculture Organisation, is that they, too, are being pillaged. Already, two-thirds of their stocks are being fished beyond sustainable limits and, as they once provided a haven for fish everywhere, yields in EEZs are suffering, too.

The UNFSA attempts to regulate high-seas fishing through clubs called Regional Fisheries Management Organisations (RFMOs). The 17 RFMOs set rules supposed to be binding on member countries (unlike about 50 other fisheries bodies which mainly provide advice). Some are confined to EEZs. But those that do extend their remit to the high seas attempt to protect two groups of fish. The first are straddling stocks, species such as cod, halibut and pollock whose habitats, and therefore populations, stretch beyond EEZs into the high seas. The second are migratory animals such as tuna and swordfish, which travel long distances between feeding and breeding grounds.

RFMOs’ decisions about how much fishing to allow are supposed to be guided by ecological reality. The overall health of an area’s stocks, for example, is often assessed by working out how many of a species there would be in that area if there were no fishing at all (a quantity known as its unfished biomass), and then estimating how far short of this level stocks currently fall. In an active fishery, they obviously will fall short of it, but the optimal shortfall is shown by a second number, the maximum sustainable yield. This is the peak crop that can be taken from a fishery, year after year after year.

Sneaky by-catches not being revealed

Translating these numbers into fishing practice can be hard. For example, two species with the same unfished biomass may, because of their ways of life, be under different levels of strain from net-casters. Fishing optimally for one might threaten the other. But data on by-catch—species netted that are not a boat’s main quarry—which would illuminate such differences, are difficult to come by, for countries are often loath to share them.

Moreover, even if data are true, actions based on them may be questionable. In 2014, for example, an RFMO called the Inter-American Tropical Tuna Commission reduced the bluefin-tuna catch in its jurisdiction from 5,500 tonnes a year to 3,300 tonnes. That sounds like common sense, but the cut recommended by the commission’s scientific advisers was to 2,750 tonnes, so the species is still at risk.

Woe is the tuna tide

Tuna seem particularly vulnerable to this sort of thing. Since 2010, the fraction of tuna stocks regarded as over-exploited has risen from 28% to 36%. Sometimes, indeed, matters descend into farce. In 2015 the International Commission for the Conservation of Atlantic Tunas, another RFMO, agreed to a 23% reduction in the quota for the Atlantic bigeye tuna after warnings from its scientists. But this will help little, for the species is now so rare that catches had fallen below the newly approved level when the change was promulgated.

There are some signs of progress. In May another RFMO, the Indian Ocean Tuna Commission, adopted tighter rules to help ailing skipjack-tuna stocks. This, according to Mireille Thom, a marine-policy specialist at the World Wide Fund for Nature, a global conservation charity, was the first time a body responsible for tuna has acted to prevent a stock from collapsing, rather than reacting to its collapse.

No one has reliable information

Skipjacks and their kin are migratory species. The state of straddling stocks can be even harder to determine. No one has reliable information on how they fare in the western central Pacific, the eastern and western central Atlantic and the Indian oceans. Some RFMOs attempt to act responsibly amid the murk anyway.

The Southeast Atlantic Fisheries Organisation has imposed catch limits on certain species, such as orange roughy, armourhead and cardinal fish, although how much these are exploited is unknown. And many RFMOs say they want to care for marine ecosystems, even if their translation of that intention into action is patchy.

Possibly, they could learn lessons from one other organisation that has high-seas jurisdiction, the Commission for the Conservation of Antarctic Marine Living Resources. This was established by international convention in 1982 and has 25 members. It was set up to prevent a repeat, in the late 20th century, of the unfettered ravaging of Antarctic wildlife (especially whales and seals) that characterised the 19th and early-20th centuries.

Under the commission’s aegis, reported catches of krill, Antarctic toothfish and other species of the Southern Ocean have fallen to a third of their levels in the 1980s and 1990s. That has been achieved by the long-term closure of certain areas to fishing efforts directed at particular prey, such as toothfish. This ensures that wildlife have enough food. The Ross Sea alone is home to almost 30,000 pairs of emperor penguins and 21,000 minke whales.

Even the Antarctic commission, however, struggles at times. For example, China and Russia oppose efforts to create the world’s largest marine reserve in the Ross Sea. Like an RFMO, the commission is only as strong as its most reticent members. Better data-gathering and greater sharing of the information discovered should at least make such reticence harder to justify.