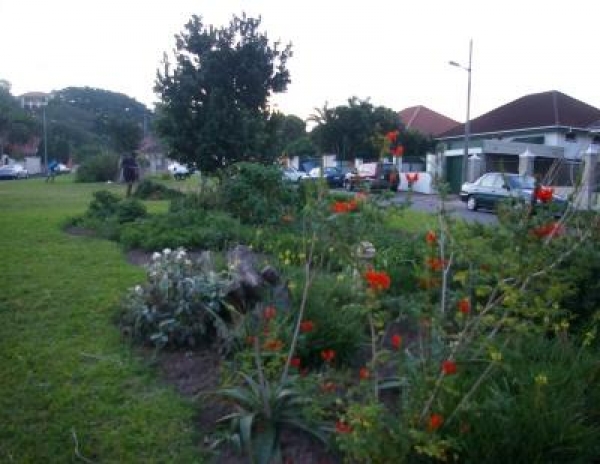 No man is an island, so the saying goes. Here’s a story of how one island transformed a group of neighbours into a community.

Stranack Road Island, shaped like a rugby ball, was once the home of four proud flamboyants (Delonix regia).

The spectacular saffron umbrella of its flowers in summer seduced many of the residents to buy here. In 2008, however, the 80 year old trees became the target of a rather aggressive and destructive insect. 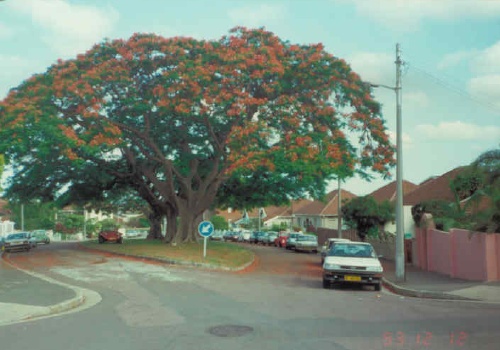 Within months they had become hollow and dangerously unsteady. On

The trees had to go

An understaffed Ethekwini Parks Department meant we had to wait indefinitely. As a last ditch attempt to save the trees, my neighbour, Bernard (No. 27) applied a pesticide to the remaining trees. He also communicated our predicament to Sue Burrows, councilor of our ward. She also pled our case to the horticulturist, Mr Lauderville from our district. When the hollow flamboyants were eventually chopped down, four tree stumps were left behind on a very sad island. 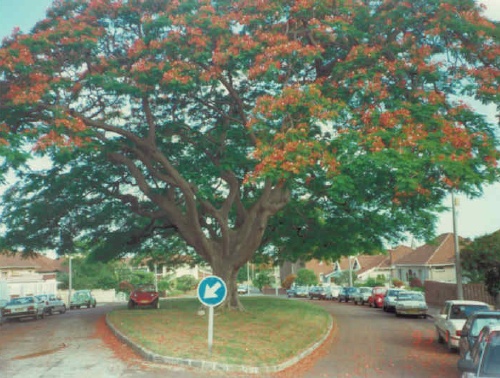 I sought advice from the Margaret Appleton from the Durban Botanic Gardens, who referred me to Manisha Arbuckle – a beacon of hope in the whole bureaucratic nightmare. Manisha worked as horticulturist for Parks and had set a personal goal to promote indigenous growth in Durban. Her contribution to our island went beyond the call of duty.

Manisha assured us that indigenous and endemic trees were touted for our island. On 2 July 2008, two syzigium cordatum and a combretum micranthum were planted on Stranack Island. Official municipal involvement then stopped. Within months the grass which had been suppressed by years of shade, sprang to new heights and Stranack Island began to resemble a jungle.

On a sweltering, summer afternoon

Dave and Irene (No. 28) decided they had had quite enough. Dave brought out his lawnmower and attacked the encroaching bush. The action proved to be a catalyst. Joe (No. 10) supplied garden refuse bags and suddenly neighbours I had never spoken to before had strayed onto the island to help. It was a day which still brings a smile to my heart. Soon the twins Keelan and Chad (No. 3) were also piling heaps of grass into bags. Our lawnmower was put to task as well, with Viv, my husband at the helm. Angela (No. 12), armed with a pair of shears attacked the bottom section of the island. Even little Blessing (No. 23) wanted in on the action. The 10 year old proved to be adept at mowing.

The busy-ness continued for many weeks. Bernard and I would often water and compost the trees. Mrs Frederick (No. 11) would pick up litter. Dave and Angela planted cheerful portulaca in the tree stumps. The local skateboarders, too, got involved, raking and clearing up, sometimes straight after school – blazers cast aside. 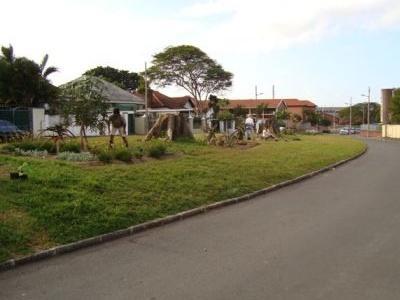 This was a community in the making so I decided host a meeting at my house. We needed a platform to share ideas and talk to each other. SOIL (Stranack Oregon Improvement League) was born, from a group of people who wanted their island to look beautiful again. SOIL meetings were then set for once a month. SOIL members decided that we wanted more than just replacement trees.

We wanted to create and indigenous green belt. In the course of a few months Bernard and I arranged with our own gardeners to dig up four large beds. Slowly neighbours began making little offerings. Aloes arrived from the gardens of Angela and Colleen (14). Irene donated magnificent rocks. Bernard built pathways with stepping stones.

We needed more plant material. I contacted Manisha once again. We were rewarded with groundcover of Dietes, agapanthus and creeping daisies. As a bonus, a few months later, she threw in a few magnificent uprooted aloe specimens! SOIL raised funds from donations and a shopping expedition to a local indigenous nursery was arranged. Here, Colleen, Bernard and Angela bought an assortment of indigenous treasures. In those early days, about five of us planted on the weekends or whenever there was time. Sometimes Keelan and Chad earned some pocket money weeding and clearing up. The island was taking shape! 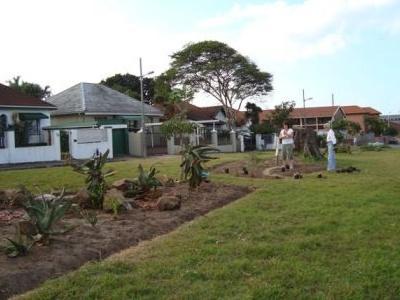 The circle of life has meant that, over time, we’ve won some and lost some. One of the Umdoni’s, two cussonias and a few shrubs did not survive. However, the magnificent replacements are absolutely flourishing. This autumn the leonotis swayed with orange opulence and the aloe flowers shot triumphantly through their prickly hosts.

Despite a few mutterings from some residents that indigenous was just not colourful enough, the island has provided a spectrum of delight, from the lavender hues of agapanthus, tulbagia and plumbago to the vivid vermillion and amber accents of wild hibiscus, kniphofia, aloe, tecoma and firestick plants (euphorbia tirucalli). We look forward to the burgeoning growth of a newly planted wild plum and a common coral tree (erythrina lysistemon). Angie has also planted a fringe tree (erythrina humeana) in memory of a friend she lost over Christmas. 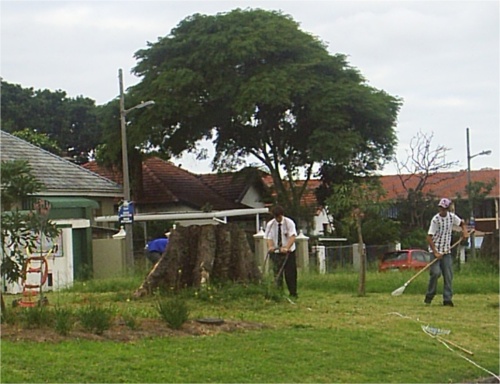 The island has attracted many visitors. Dog walkers include Stranack Road in their route. For months one little boy skipped along the stepping stones after school while his mum waited patiently at the edge of the island. Our ‘wilderâ€ visitors include heron, kingfisher, hammerkop and whydah. A makeshift birdbath in the shade of the Umdoni tree has become an alluring pool for hadeda. I have also never seen such a variety of butterfly in the neighbourhood.

A common goal to beautifying an island has caused some of the walls of suburban living to disintegrate. The rugby ball shaped island in the middle of Stranack Road is now a place of healing, playing, laughter and communication.

SOIL stills meets once in two months to discuss ways to raise money for the upkeep of the island. Contributions from residents pay towards grass cutting and a gardener to keep the weeds under control. 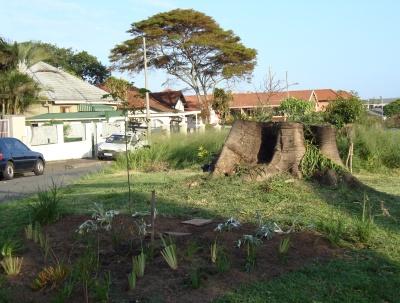 In the spring of 2009 SOIL held its first party, island style! It was joyous a coming together of neighbours to celebrate the beauty of the work done. Sharing in the fun were babies and even Bev’s (No. 24) little Maltese poodle!

SOIL also applied to ‘adopt-a-spot,’ a municipal programme encouraging local organisations, groups and schools to take over the care of certain areas. This took almost a year to achieve but during this time SOIL enjoyed the somewhat irreverent status of being called guerrilla gardeners. SOIL was asked to share its story at a workshop held at the Durban Botanic Gardens for scouts on guerilla gardening, which it did with pride.

The children have rediscovered the joy of outdoor play and during World Cup Fever last year many an aspirant soccer player practiced on the grassy areas between the beds. The children Tarique, Jacob, Anton, Diedieu, Tumelo and Blessing were so passionate about soccer, that we decided to leave an open area on island for play and off course, parties.