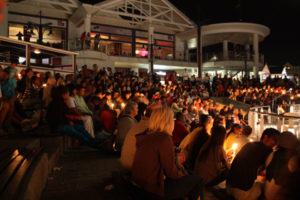 Cape Town is the World Wide Fund for Nature’s (WWF) Global Earth Hour’s City Capital for 2014. The announcement was made at a ceremony  in Vancouver, Canada – which won the award in 2013. This accolade is a prestigious honour that recognises the city’s innovative actions on climate change and its dedication to pursuing the goal of a sustainable urban environment.

Cape Town was selected as the global Earth Hour Capital from among 163 entrants in 14 different countries, after an expert jury reviewed the actions and commitments reported on by these cities.

Cape Town was triumphant over leading world cities, such as Colorado, Chicago and Cleveland in the United States of America; Seoul and Suwon in South Korea; Copenhagen in Denmark; Rio de Janeiro and São Paulo in Brazil; Antwerp in Brussels; and Edmonton, North Vancouver and Surrey in Canada.

‘It is a proud moment for the residents of Cape Town, and indeed for South Africa, that Cape Town has been named WWF’s Global Earth Hour Capital for 2014. We are honoured to take the baton from Vancouver who won the award last year. This exceptional accolade is an international endorsement of our comprehensive efforts around sustainability. We are delighted that Cape Town has been selected from amongst so many great cities in the world striving to create attractive, smart cities while tackling a multitude of urgent environmental and social challenges.

Towards a resilient city that respects the environment

‘Travelling on the route to sustainability is a shared responsibility. Through this award Cape Town is being acknowledged for the incredible efforts being made by so many individuals and organisations to make our city a more sustainable and more habitable place. We know we have a lot more work to do and the Earth Hour City Challenge is a great way for our city and our community to be inspired to continue moving forward, together.

‘Thank you to the WWF for encouraging and motivating our city planners and officials to create a resilient city that acts responsibly and respects the environment,’ said City of Cape Town Executive Mayor, Patricia de Lille.

The WWF was impressed with Cape Town’s considerable attempts to actively address climate change and the exceptional will demonstrated to reduce the dependence on fossil fuels, with initiatives like the retrofitting of City buildings, more energy efficient traffic and street lights, the solar water heater programme, the MyCiTi roll-out, the introduction of cycle lanes, and the active campaign to save electricity, whilst transitioning toward a truly sustainable future powered by renewable energy.

‘A hearty congratulations to Cape Town. While this competition does not label cities as having achieved sustainability per se, it underscores the actions and commitment that can inspire other cities to work towards the goal of sustainability. In this respect, Cape Town has done us proud,’ said the CEO of WWF South Africa, Dr Morné du Plessis.

The Earth Hour City Challenge builds on the spirit of Earth Hour, challenging cities and countries to do more than turn off their lights for one hour. It rewards those cities that create ambitious and inspiring plans to address climate change.

‘By telling Cape Town’s story and by sharing many of the initiatives we are working on, our participation in the Earth Hour City Challenge allowed us to learn from other cities, pushing us to think more creatively with respect to climate action in Cape Town. With the help of our residents, the business community and other civic organisations, Cape Town will continue to further reduce emissions from energy use and from transportation and waste, while showing that it is possible to have a thriving, dynamic economy at the same time,’ said the City’s Mayoral Committee Member for Economic, Environmental and Spatial Planning, Councillor Garreth Bloor.

The City’s Action Plan for Energy and Climate Change aims to secure the city’s future in a new, low-carbon world. More than 120 projects are ongoing, with a focus on resource efficiency, sustainable transport, adaptation, climate finance and improved monitoring and evaluation.

‘This is an attempt to reconstruct and reconnect a city that has been divided for many decades and to lay the foundation for a more sustainable city for future generations. It is quite clear that the diversity of the people of Cape Town is one of the most powerful advantages we have as we continue to travel on the route of sustainability,’ said Councillor Bloor.

The Action Plan addresses an array of issues from the quality of the City’s housing stock, to traffic lights and the weather, to the city sprawl, its coastal zone, its economic base and learning activities at local schools.

Capetonians were urged to partner with the City and take part in Earth Hour. On Saturday 29 March 2014, millions of people from around the world once again switched off their lights from 20:30 to 21:30 (local time) in support of WWF’s Earth Hour. The City of Cape Town switched off the lights in its own buildings and on Table Mountain.