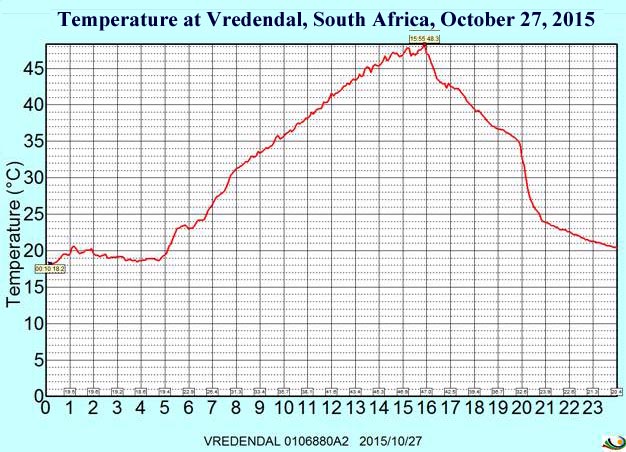 The new global October heat record was made possible by a “Berg wind”–a hot dry wind blowing down the Great Escarpment from the high central plateau to the coast. As the air descended it warmed via adiabatic compression, causing the record heat. These sorts of foehn winds are commonly responsible for all-time record temperatures; mainland Antarctica’s all-time record high of 17.5°C (63.5°F), set on March 24, 2015, was due, in part, to a foehn wind (see wunderground weather historian Christopher C. Burt’s blog post on this.)

According to Herrera, the previous world October heat record of 47.3°C was set at Campo Gallo, Argentina on 16 October 1936, and South Africa’s highest reliable temperature for any month is 48.8°C (119.8°F), recorded at Vioosdrif in January 1993. 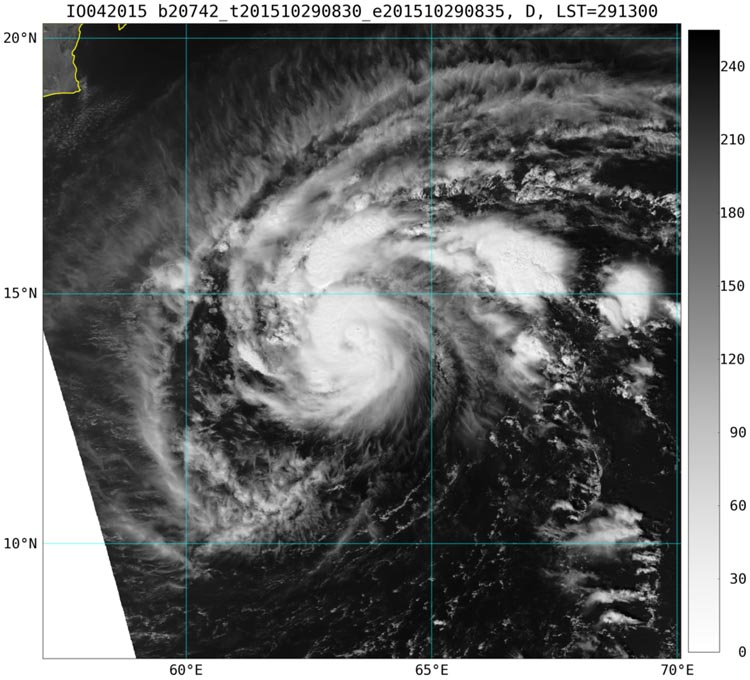 Figure 2. Tropical Cyclone Chapala as seen by the VIIRS instrument at 08:30 UTC October 29, 2015. At the time, Chapala was intensifying from a tropical storm with 65 mph winds to a Category 1 storm with 75 mph winds. Image: NOAA/RAMMB.

Tropical Cyclone Chapala a threat to Yemen and Oman

In the Arabian Sea, Tropical Cyclone Chapala has spun up to hurricane strength, with top winds of 75 mph estimated at 8 am EDT Thursday by the Joint Typhoon Warning Center. Chapala is expected to take advantage of low wind shear, warm ocean waters near 30°C (86°F) and favorable upper-level outflow to intensify into a Category 4 storm by Sunday. Thereafter, weakening is likely as the storm encounters higher wind shear, lower oceanic heat content, and interaction with land. Chapala is likely to make landfall on Monday in a sparsely populated area near the border of Yemen and Oman.

Wunderblogger Steve Gregory has an a new Thursday afternoon post, Unseasonably Warm Weather Ahead – and More Rain. There’s a super-cool 2-year+ animation of the change in sea surface height in the Pacific due to El Niño, check it out!