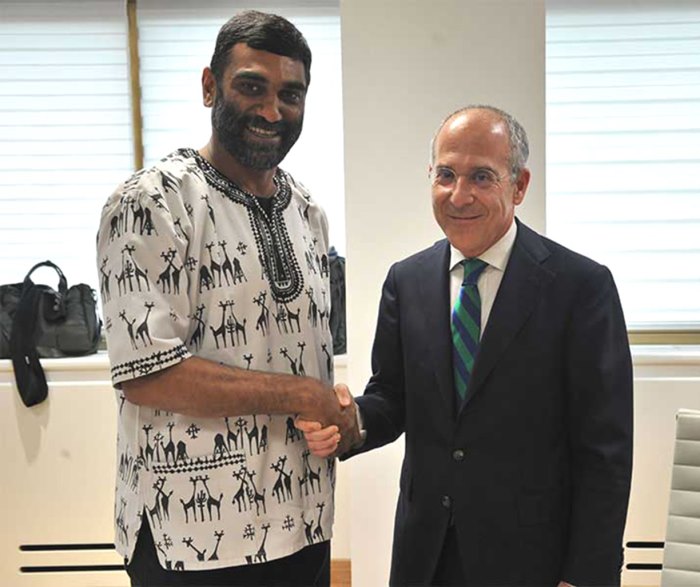 One wears an impeccably tailored navy blue suit. The other sports a giraffe-print dashiki shirt.

Meet the renewable-energy odd couple, the environmental activist and his onetime target, the chief of Italy’s largest utility.

A year ago, Kumi Naidoo, the head of Greenpeace International, and Francesco Starace were sworn enemies, after the group said Enel SpA’s coal plants were killing people. Now, they’re drinking orange juice together at the Four Seasons in New York, discussing the urgent need to fight global warming.

From legal claims to allies

“We were not only not talking to each other, we had legal claims against each other,” recalled Starace, who took over as Enel’s chief executive officer in May 2014. He’s expected to discuss the company’s shift to renewable energy during a keynote address Monday at the Bloomberg New Energy Finance Summit in London.

“We thought that what Enel was doing was critically necessary and that we needed to acknowledge and encourage it,” Naidoo, 50, said during a joint interview with Starace at the Manhattan hotel. “It was a first, and we welcomed their actions.”

The dispute dates to 2012, when Greenpeace introduced a publicity campaign to draw attention to Enel’s coal plants, which it said were belching enough pollution to kill 1,000 Europeans each year. Rome-based Enel responded with a lawsuit, demanding Greenpeace take down part of its website and withdraw the assertions.

While an Italian court eventually ruled in Greenpeace’s favor, the litigation dragged on until Enel dropped the suit this year. Starace said the decision is part of an effort to transform the utility from a coal-powered behemoth to a climate-friendly champion of wind and solar. And with his new ally Naidoo, he’s seeking to spread the gospel to other utility executives.

“We have to acknowledge that the climate clock is ticking and time is of the essence,” said Starace, 60. Conventional fossil fuels and nuclear power plants are “a trap,” he said. “A trap for companies to die.”
Utilities Shifting

Starache expanded on the warning during Monday’s Summit conference: “It is very easy to destroy value on these kinds of investments,” he told the audience. “We should stop doing that. The track record this industry has on very large investments is very poor.”

Enel is one of several utilities backing away from fossil fuels. As renewable energy becomes both more effective and affordable, and increased regulation of greenhouse gases becomes more certain, a growing number of power companies are recognizing that their historical reliance on coal will face increasing challenges.

Germany’s largest power company, EON SE, announced plans in November to focus on renewable energy and distribution, while consolidating its oil and gas operations and conventional generation assets into a new independent company. NRG Energy Inc., the biggest U.S. independent power producer, is in the process of forming a separate unit for its clean-power assets.

Under Starace, Enel has pledged to close 23 coal plants in Italy, roughly half its fleet, and canceled plans for two more in Italy and Chile. Enel Green Power, the unit Starace formerly ran, is pursuing renewable projects from Brazil to India to Oklahoma. The state-owned company has committed to being carbon-neutral by 2050.

All that made Greenpeace take notice, said Naidoo, a former human-rights campaigner from South Africa.

Working together to encourage others to shift away from fossil fuels

Enel and Greenpeace held talks in March in an attempt to end their feud. They agreed to work together to encourage other utilities to shift away from fossil fuels. In July, Starace held a teleconference with Greenpeace leaders around the world, as Naidoo tried to calm reservations about teaming up with the former adversary.

On Enel’s side “there was a little bit of fear that we would be manipulated, exploited,” Starace said. “The moment I saw him, I knew that was not the case.”

Starace sees the business case for embracing renewables, not just an environmental cause. Big nuclear and coal plants lock utilities into long-term investments that run over budget and don’t keep up with new technology, he said. Yet breaking that cycle requires a transition that’s by no means painless – Enel produced 29 percent of its power from coal last year, according to company figures.

“You need to be willing to say, even if it’s my own arm, I’ll cut it off if it’s not needed,” Starace said. “Big is bad. Our strategy is much more flexible and modular then it was before, and more adaptable to the world we live in.”

Enel plans to retire 13 gigawatts of fossil-fuel power by 2020. Starace said his newest coal plant was completed last year and may be retired before its expected 40-year life is up.

“He’s moving away from a fetishism of big, centralized energy plants,” he said. “The ethical thing, the economically right thing to do, is not pour more investment into that.”